Manchester City drew for a second successive Premier League match as a resolute West Brom fought back to snatch a point. 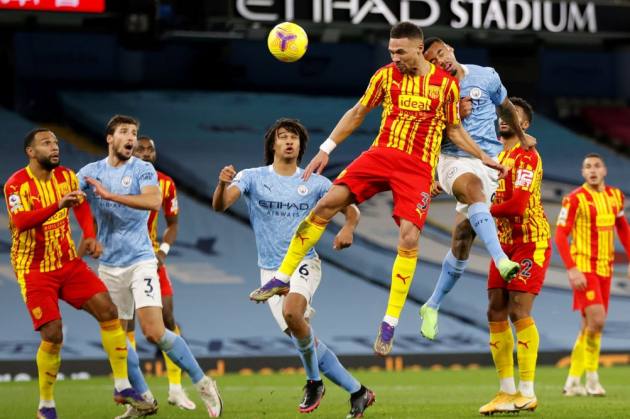 Manchester City were held again in the Premier League as West Brom snatched a 1-1 draw thanks to Ruben Dias' own goal. (More Football News)

On the back of a lacklustre Manchester derby, City once again lacked the cutting edge they have so often shown under Pep Guardiola's tutelage.

Ilkay Gundogan's 30th-minute strike – his first in the Premier League in almost a year – nosed City ahead on Tuesday, but they were pegged back when Dias turned in Semi Ajayi's wayward effort.

Though Sergio Aguero made his return late on, City failed to pick the lock, Sam Johnstone making two wonderful stoppage-time saves either side of Gundogan curling a free-kick inches wide as the Baggies held on for a hard-earned point.

Despite enjoying 63.2 per cent possession in the opening five minutes, City should have been behind when Grant found space in their area, only to curl a tame effort straight at Ederson.

Rodri sent a header over from Kevin De Bruyne's excellent corner in the 25th minute, yet City soon had the lead their dominance warranted.

Joao Cancelo fed Raheem Sterling, who rolled it back for Gundogan to sweep home his first Premier League goal in 359 days.

For all City's dominance, it was West Brom who struck next – Ajayi managing to get away a shot that diverted in off Dias to level the scores at half-time.

De Bruyne prodded wide from 18 yards shortly after the restart, before again turning provider with a corner, from which Gabriel Jesus headed over.

Johnstone thwarted Jesus and De Bruyne as City kept up the pressure, with Guardiola turning to Aguero with 15 minutes remaining, but West Brom's goalkeeper again came up with the goods in injury time.

Having kept out a close-range header from Gundogan – who subsequently sent a free-kick into the side netting – Johnstone spread himself to deny Sterling a last-gasp winner and seal a deserved draw.

What does it mean? Little pre-festive cheer for City

While the draw takes West Brom six points clear of Sheffield United at the bottom, City, who are three points outside the top four, have risked losing further ground on the teams around and above them heading into a hectic Christmas period.

Guardiola's team had 76.9 per cent of the ball yet failed to take the chances that fell their way late on. Indeed, their tally of 18 goals after 12 league games is 17 less than they had managed at the same stage last season.

Johnstone stands tall to give Baggies a bounce

A former Manchester United goalkeeper, Johnstone did himself proud between the sticks as he pulled off a string of vital late saves.

He made six stops in total but saved the best for last. While both Gundogan and Sterling really should have directed their headers either side of West Brom's goalkeeper, Johnstone reacted with great speed and agility to claim a share of the spoils.

Dias' own goal ended a run of 608 minutes without conceding for City, since Giovani Lo Celso put Tottenham 2-0 ahead on November 21.

Three different Portuguese players have now scored a Premier League own goal this season, matching the amount of players from Portugal who had put through their own net in the competition between 1992-93 and 2019-20.

10h 8m - Rúben Dias' own goal was the first goal Manchester City have shipped in 10 hours and 8 minutes in all competitions, since Giovani Lo Celso's goal for Spurs in November. Unexpected. #MCIWBA

- This result ended a run of eight straight Premier League home wins against promoted sides for Manchester City, since a goalless draw against Huddersfield Town in May 2018.
- West Brom ended a 13-game losing streak against City in the Premier League, picking up their first point against them since a 0-0 draw in December 2011.
- City's haul of 26 shots was the most they have had in a Premier League home game without winning since August 2019 against Tottenham (30).
- Raheem Sterling has been involved in 148 goals in all competitions for City under manager Pep Guardiola (95 goals, 53 assists), more than any other player at the club since the Spaniard joined in 2016.
- Ilkay Gundogan's opener for City was his first Premier League goal in 22 games, since netting against Leicester City last December.

A trip to high-flying Southampton follows for City on Saturday, while West Brom host Aston Villa in a west midlands derby.