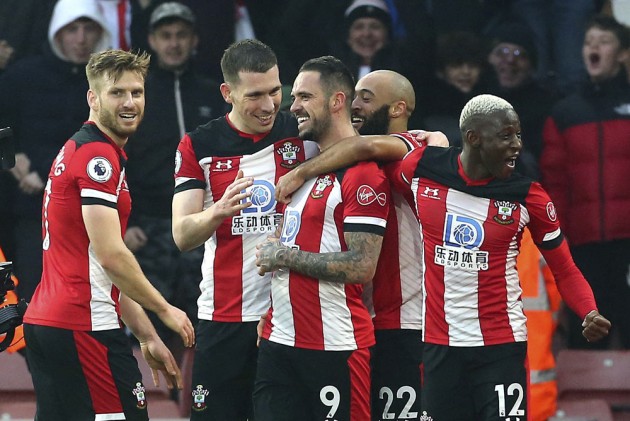 Ings, behind only Jamie Vardy in the league's scoring charts, hit the only goal as Southampton moved up to 11th in the table by virtue of a third win in four games over the festive period.

Tottenham trailed at half-time for the fourth straight league game and could not find a fightback, with Jose Mourinho's men unable to capitalise on Chelsea's draw at Brighton and Hove Albion in the race for Champions League qualification.

Their New Year's Day misery was compounded by star striker Kane limping off having appeared to hurt his left hamstring in the process of scoring an equaliser that was ruled out for offside.

Paulo Gazzaniga made a sharp low stop to keep out Nathan Redmond's shot at the end of a mazy run and Ings then put Saints into a deserved lead in the 17th minute at St. Mary's.

The in-form striker collected Jack Stephens' pass, lifted the ball over Toby Alderweireld's head, watched it bounce and confidently finished on the volley for his 13th league goal of the season.

Spurs then lost Tanguy Ndombele to injury and his replacement Giovani Lo Celso had a shot deflected wide before Jan Vertonghen missed a brilliant chance at the back post after goalkeeper Alex McCarthy recovered from fumbling Kane's drive to deny Dele Alli.

Southampton started the second half in similarly strong fashion, Redmond volleying wide within a minute of the restart before Alderweireld escaped after a VAR check for a handball in the box.

Vertonghen's tame header in the 69th minute was the first effort Spurs managed in the second half and their day got even worse when Kane went off after turning in Christian Eriksen's pass, only to see the offside flag raised as he hobbled away.

Mourinho was then booked by referee Mike Dean after he was involved in a confrontation with a member of the Southampton backroom team as Spurs unravelled.

What does it mean? Problems at both ends for Spurs

Defensive issues have been causing Mourinho the most headaches since he succeeded Mauricio Pochettino but Spurs, who stay sixth, were blunt in attack on the south coast. Kane was again ineffective, suffering from a lack of service with Son Heung-min suspended, with the England captain now set for a spell on the sidelines.

Spurs took just four points from a possible 12 over Christmas compared to Southampton's impressive haul of 10, with Saints boss Ralph Hasenhuttl continuing to steer his team up the league.

With nine goals in his past nine Southampton starts, Ings is in the form of his life. The former Liverpool forward struggled with injuries at Anfield but is fit and firing his way back into England contention.

The 27-year-old won his solitary cap for the Three Lions in October 2015 but Gareth Southgate must be considering him as an option for his Euro 2020 squad with Ings having now hit 20 goals in 45 Premier League appearances for Saints.

20 - Danny Ings has scored his 20th Premier League goal for Southampton in his 45th appearance - only Marians Pahars reached this total in fewer PL apps for the Saints (44). Poachers. pic.twitter.com/woI8P1tY4D

Spurs made a rare big play in the transfer market to sign the highly rated Ndombele from Lyon but the midfielder has struggled to make an impact. He managed only 25 minutes on his 10th Premier League start of the season and he is nowhere near justifying his club-record €60million (£55m) fee.

Squad rotation is likely when both sides play in the FA Cup third round at the weekend. Saints host Huddersfield Town and Spurs, who go to leaders Liverpool in their next Premier League game on January 11, are away at Middlesbrough.