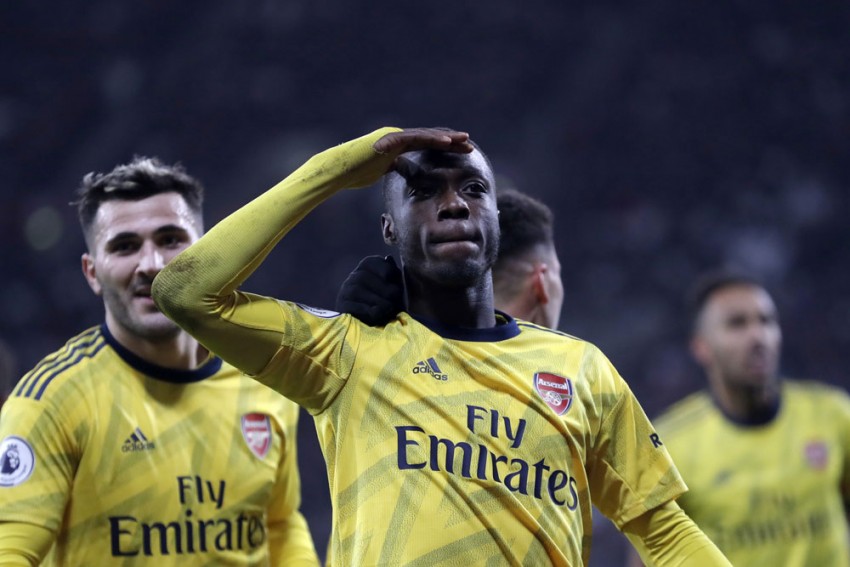 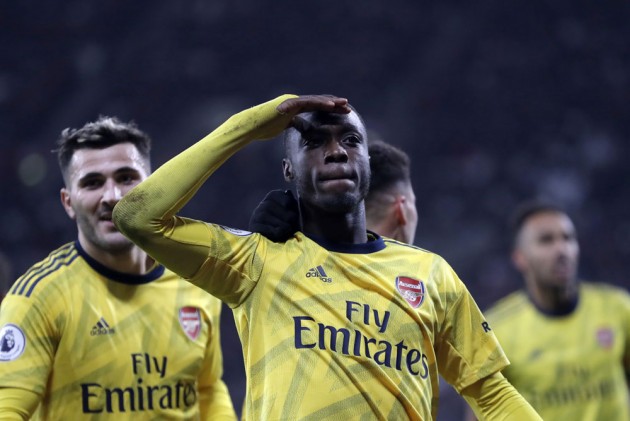 Arsenal ended a seven-match Premier League winless run as they came from behind to beat West Ham 3-1 and give Freddie Ljungberg his first victory as interim head coach. (More Football News)

The sacking of Unai Emery had not yielded the expected upturn in fortunes most would have expected, with Ljungberg overseeing a 2-2 draw at Norwich City and a 2-1 home defeat to Brighton and Hove Albion in his first two games in charge.

It looked set to be another chastening evening for Ljungberg when Angelo Ogbonna put West Ham ahead in the 38th minute at London Stadium.

Arsenal's display had been limp and lifeless in the first half but Gabriel Martinelli's goal on his full Premier League debut sparked them into life.

A spectacular Nicolas Pepe strike made it 2-1 and Pierre-Emerick Aubameyang converted a cross from the former Lille star for the Gunners' third goal in the space of nine minutes, a blitz Manuel Pellegrini's struggling Hammers never recovered from.

The early omens for Arsenal were worrying as they lost Hector Bellerin to injury in the warm-up.

Ainsley Maitland-Niles took his place in the starting XI and, having been deprived of one full-back, the Gunners then saw another forced off as Kieran Tierney suffered a shoulder injury and was replaced by Sead Kolasinac.

There was further frustration for the visitors when Mesut Ozil headed over from point-blank range from Aubameyang's left-wing cross.

The impact of that miss was exacerbated as Ogbonna broke the deadlock.

Arsenal failed to clear a Snodgrass corner and Pablo Fornals whipped a right-wing delivery in for Ogbonna, whose effort deflected in off Maitland-Niles and was allowed to stand despite it appearing to come off his shoulder.

Ljungberg's men had offered little to suggest a fightback was on the cards but, against the run of play, they levelled matters as Martinelli got off the mark in the Premier League.

Kolasinac did excellently to pick out the Brazilian, who found the bottom-right corner with a confident first-time finish, and six minutes later the turnaround was completed in stunning fashion.

Pepe cut in from the right and bent an unstoppable strike into the far corner before then lofting a cross into the box for Aubameyang to fire an acrobatic strike into the ground and beyond David Martin, who, despite getting a hand to the ball, could not keep out a shot that proved the telling blow in the contest.

What does it mean? Ljungberg helps his case

Ljungberg is reportedly a serious contender to replace Emery long term and the resilience Arsenal displayed in the second half will do his chances no harm.

As for his counterpart Manuel Pellegrini, the haste of West Ham's collapse will be a significant concern. West Ham are 16th, just a point above the bottom three, Arsenal move up to ninth.

Pepe proves his worth

Pepe had done little in the first four months of his Arsenal career to justify his €79million transfer free, but his instrumental performance should give the Ivory Coast international confidence to make the consistent impact that was expected following his arrival.

Masuaku fails to fill the void

Pressed into service at left-back by an injury to Aaron Cresswell, substitute Arthur Masuaku had a night to forget.

He allowed Pepe to cut in from the right far too easily for Arsenal's second goal and was similarly lax as the same man supplied a superb ball in for Aubameyang to make it 3-1.

- West Ham have lost three in a row at home in the Premier League for the first time since August 2015.

- Arsenal ended a run of nine games in all competitions without a win (D6 L3).

- They came from a losing position at half-time to win a Premier League away game for the first time since October 2011 (5-3 v Chelsea).

- Since his Premier League debut in February 2018, Aubameyang has scored 43 goals in the competition, a joint-high along with Jamie Vardy.

Arsenal can secure progression from Europa League Group F when they visit Standard Liege on Thursday before welcoming Manchester City to Emirates Stadium on Sunday, a day after West Ham travel to Southampton for a crucial clash at the bottom.