West Ham United FC are level on 20 points from 10 games with the third-place Manchester City in the Premier League. 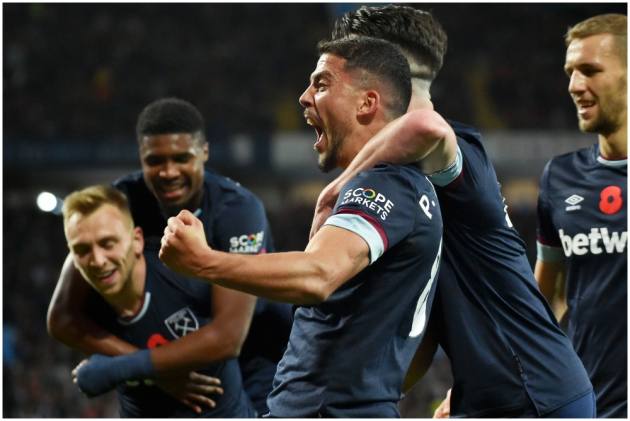 The victory at Villa Park came only four days after the Hammers ended City's four-year reign as English League Cup titleholder, knocking Pep Guardiola's team out to reach the quarterfinals.

West Ham is level on 20 points with third-place Manchester City in the Premier League but it won't be relaxing any time soon.

“It's been a great week. But you know what happens in football, it can quickly turn around and bite you," West Ham manager David Moyes said.

“But I think we've got to the stage where we're really confident in a lot of the things we do. The players are understanding their roles and what's expected of them.

“We can't let up, though, I've told them that if we think we're doing great and it's all easy it'll fail, so we've got to keep at it."

West Ham has experienced a revival under Moyes, finishing sixth last season, but hasn't secured a major trophy since winning the 1980 FA Cup.

“I saw a lot of character from my team today and I am certainly sure we can turn it around with the squad we've got," said Villa manager Dean Smith, whose job could be in doubt.

"There are reasons why we've had the results we've had.”

In the other EPL game Sunday, Leeds won 2-1 at last-place Norwich.

West Ham began with confidence and opened the scoring in the seventh, when Declan Rice passed out to the right for Ben Johnson, who cut back inside and curled a low shot into the far corner of the net with his left boot.

Ollie Watkins equalized in the 34th, but that was as good as it got for hosts Villa.

Rice restored the visitors' lead four minutes later with a 25-meter (yard) shot that bobbled in via the post. Pablo Fornals tapped in a rebound for 3-1 in the 80th and Jarrod Bowen sealed it four minutes later.

The visitors were aided by Ezri Konsa's sending off after 50 minutes with the score at 2-1. The Villa defender was initially shown a yellow card for tripping Bowen on the edge of the penalty area, but it was changed to red after a VAR review for denying a clear goal chance.

“The referee has made his decision —yellow card. Is it a clear and obvious error? No, I don't think it is.”

Norwich's nightmare return to the Premier League continued as it came off worst from a frenetic four-minute spell against Leeds.

Raphinha and Rodrigo grabbed second-half goals to earn Leeds a 2-1 win at Carrow Road as Marcelo Bielsa's team picked up a second top-flight victory of the season.

Raphinha opened the scoring in the 56th before Andrew Omobamidele leveled in the 58th. Just two minutes later, the Canaries succumbed to Rodrigo's long-range effort that slipped through Tim Krul's grasp as Norwich's winless run in the Premier League extended to 20 matches, 10 of them this season.

Norwich, which lost 7-0 at Chelsea in its previous league game, is bottom with only two points. Leeds has 10 points from 10 games.