Pedro Neto and Daniel Podence were on target for Wolves in a 2-1 win at Arsenal, although Raul Jimenez's injury cast a shadow over the game. 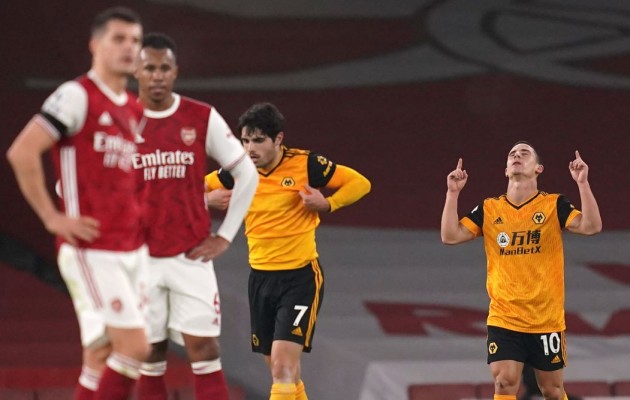 Wolves recovered from the shock of a sickening injury to top scorer Raul Jimenez to claim a 2-1 Premier League victory at Arsenal.

Jimenez appeared to be knocked unconscious following a fifth-minute clash of heads with David Luiz and received oxygen on the field during almost 10 minutes of treatment before being taken to hospital.

In the absence of their top scorer, Wolves hit the front through Pedro Neto and, although Gabriel briefly headed Arsenal level, the visitors claimed a deserved three points through Daniel Podence's superbly taken 42nd-minute winner.

The result moves Wolves up to sixth in the table, with Arsenal languishing in 14th.

Following the long delay and amid a fog of deep concern over Jimenez's wellbeing, Wolves took a 27th-minute lead.

Adama Traore got the better of Kieran Tierney down the Arsenal left and Neto was on hand to convert when Leander Dendoncker's header came back off the crossbar.

The visitors' advantage did not last long, with Gabriel powering home Willian's cross from a well-worked short corner.

Opportunism and poor Arsenal defending were again evident when Wolves made it 2-1 - Podence deftly lifting a bouncing ball over Gabriel and finding a finish after Bernd Leno saved Neto's deflected strike with his legs.

Our first win at the Emirates, but some things are more important than football. All of our thoughts are with Raul Jimenez. #ARSWOL

Traore was influential during the build-up once more and then slashed a stoppage-time attempt into the side netting.

The direct running of Wolves' attackers continued to cause Arsenal problems after the break and Hector Bellerin needed a last-ditch block to deny Podence with an hour played.

Wolves' superiority appeared to encourage sloppiness inside the final 20 minutes, with chances offered up to Pierre-Emerick Aubameyang and Reiss Nelson.

Aubameyang remains without a Premier League goal in open play since the opening weekend of the season and headed wastefully over from Bellerin's 82nd-minute delivery.

What does it mean? Arsenal mark Emery anniversary in unfortunate style

Exactly a year on from Unai Emery being relieved of his duties at Emirates Stadium, Arsenal seem no closer to once again being a Premier League force. The congested nature of the early-season table means their lowly position should not cause huge concern, but they have now won one and lost four of their past six league matches, scoring just twice in that period.

Having been a blameless participant in the horrific Jimenez accident, it is hard to imagine what an ordeal playing on must have been for David Luiz. However, it feels like there is a much more straightforward conclusion when it comes to whether or not he should have been allowed to continue.

To take an example from another sport, where concussion substitutes have recently been introduced, Australia cricket star Steve Smith passed an initial concussion test after being struck by a Jofra Archer bouncer, but was withdrawn from the remainder of last year's second Ashes Test when he failed a subsequent examination the morning after.

Luiz may not deteriorate similarly but it felt wrong for him to be allowed to play on, with Arsenal eventually replacing him at half-time. Once again in the area of concussion, football's protocols appeared unfit for purpose.

Nuno Espirito Santo's recent switch from his trusted 3-4-3 formation to a 4-2-3-1 had the key impact of unleashing Wolves' talented support attackers here.

Even without Jimenez as their focal point, goalscorers Neto and Podence and the relentlessly menacing Traore caused Arsenal no end of problems. Podence's five dribbles even outstripped Traore's four, while Neto matched the Spain winger for a game-high three key passes.

Arsenal have lost three consecutive Premier League games at the Emirates for the second time since the start of last season (also December 2019); before this, they had never previously suffered three consecutive home defeats in the competition.

- Wolves have amassed 17 points in this season’s Premier League (W5 D2 L3) - their most productive first 10 games of a top-flight campaign since 1979-80 when they would have had 20 points under a three-points-for-a-win system.
- Arsenal’s tally of 13 points is their lowest after their opening 10 matches of any league campaign since the 1981-82 season when they had 12 at this stage.
- During 2020, only Manchester United (nine) have won more Premier League fixtures away from home than Wolves (seven – level with Liverpool, Manchester City and Southampton).
- Arsenal have lost five of their last eight Premier League games (W2 D1), having only lost five of their first 22 such matches under Mikel Arteta (W11 D6 L5).
- Pedro Neto has scored as many goals (three) in Wolves' 10 Premier League games this season as he managed in 29 such appearances last term. He has also scored in back-to-back matches for the very first time in the competition.

Arsenal entertain Rapid Vienna in the Europa League on Thursday before facing the short trip to Tottenham for the north London derby on Sunday, when Wolves face a similarly tricky assignment at Liverpool.