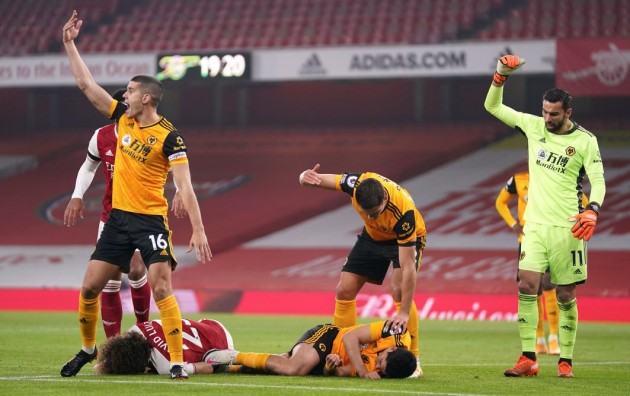 Jimenez collided heavily with Arsenal centre-back David Luiz when defending a fifth-minute corner at Emirates Stadium and left the field on a stretcher after receiving oxygen and lengthy medical attention.

As their team-mate was transported to hospital, where he is conscious and has undergone a scan, Wolves outplayed their hosts, with goals from Pedro Neto and Daniel Podence either side of Gabriel's equaliser good enough to claim the points and lift them to sixth in the table.

"When it happened, you knew straight away," captain Conor Coady told Sky Sports when asked about the severity of the incident, after which David Luiz played on but was substituted at half-time.

"I hope David Luiz is okay too, it was a horrible clash of heads. You don’t like to see it in football.

"It was a tough thing that happened. We just hope and pray that everything's okay.

"I was just behind him, so I jumped with him as well and you heard it. As they dropped… he was on his side, it was important we kept him on his side.

"It's something you never want to see with one of your team-mates or anyone in the Premier League.

"He's the one thing that matters today. We got a fantastic result but all that matters is making sure Raul and David Luiz are okay."

Raul's head injury is being assessed with a scan at a London hospital.

We will continue to update with more information as soon as we have it. pic.twitter.com/y2lowSYUxD

After the match, updates over Jimenez's condition were the first thing Coady and his colleagues asked about.

"He's in the hospital and by all accounts he's awake and breathing. I don’t know too much," the England defender said.

"It's important now we get Raul sorted because it was a massive collision."

Wolves boss Nuno Espirito Santo explained that concern will remain until the extent of the injuries suffered by Jimenez are known.

"He's doing a scan now. He's conscious. He's okay inside the gravity of the problem, of course," said the Wolves manager.

"It is serious. It was a bad moment for everybody, both teams, both players. We wish everything to be okay. Now we are worried, of course.

"You see the panic in their eyes [the medical staff] and you think the very worst. We are worried.

"He speaks, he is aware and now he is doing a proper assessment. He is in good hands."

In the circumstance, Nuno was delighted by the performance of his team as Neto, Podence and Adama Traore all dazzled in a superb attacking display.

Our first win at the Emirates, but some things are more important than football. All of our thoughts are with Raul Jimenez. #ARSWOL

"Amazing, amazing. I'm very proud today. This team showed heart. A will, a belief, the way they ran and worked was really good to see," he said.

"Today was a reflection of how much these players believe in themselves and how much they grow as a unit."

Despite experiencing a result that leaves his side languishing 14th in the table, Arsenal boss Mikel Arteta's first thoughts were also with the stricken Jimenez.

"Obviously we are worried about Jimenez because it looked really nasty. When you see the concern of the players you know something bad is happening," Arteta said.

"We would like to send our love to him and his family and hopefully it is not as bad as it looks."