Erling Haaland was in top form in Borussia Dortmund's UEFA Champions League Round Of 16 encounter Vs PSG. 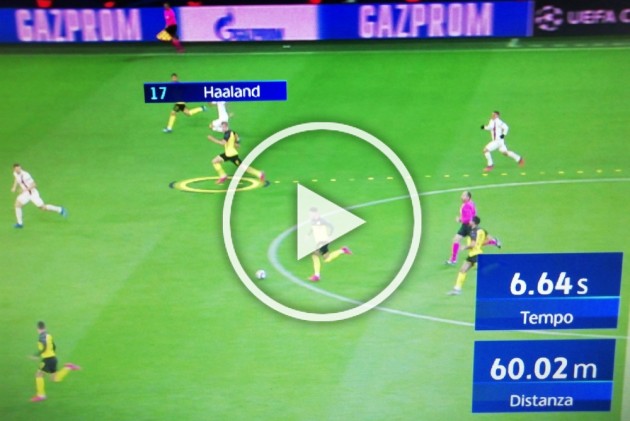 Borussia Dortmund edged past PSG in an incredible UEFA Champions League encounter, with Erling Haaland scoring a brace in a 2-1 win at home. Other than his brace, the Norwegian wonderkid has been in fantastic form, and joined the Bundesliga outfit in January. On Tuesday night, other than scoring twice, he was clocked running 60 metres in only 6.64 seconds.

The timing would have qualified him for the World Indoor Championship 60m final in 2018. The world record is 6.34 seconds set by Christian Coleman, who did it in 2018 in Albuquerque. In that race, eight-placed runner Emre Zafer Barnes and Halaand's pace was only three tenths of the world record for the distance.

The former Red Bull Salzburg man is considered to be a top talent, with Dortmund having beaten the likes of Manchester United for his signature. Other than an incredible running start in his kitty, the 19-year-old has a dominating physical presence against opposing defenders, and his reaction timing is one of the best in world football currently.

Against PSG, he scored his ninth and 10th Champions League goals this season. For Salzburg, he had scored eight.

Haaland gave Dortmund the lead in the 69th minute, with the French side's defence caught in a chaotic manner. But then it only took six minutes for Neymar to equaliser, but then it was shortlived.

Haaland completed his brace two minutes later, via a Gio Reyna assist. The second goal was a piledriver by the poacher.

Dortmund bought him for €20million and his performances are making it look like one of the best bargains in world football history.