Euro 2020: Anguished England Prepare For Their Nemesis Germany In Round Of 16

The Germans lead the head-to-head record with 15 victories as against England's 13 losses. There have been four draws. 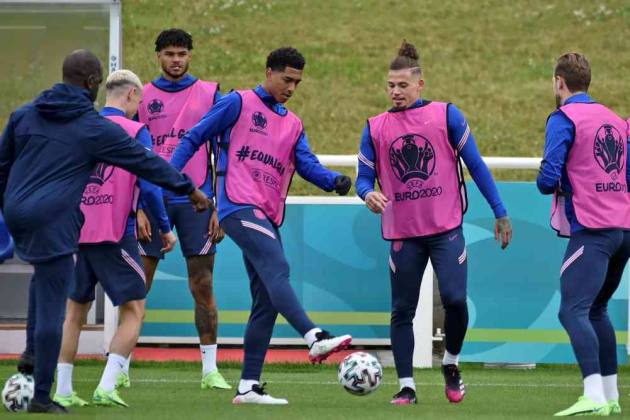 When you train on the Sir Bobby Charlton Pitch, it's hard escape the burden of past glory.

And when Gareth Southgate is your coach, it's even harder for the England players to escape the anguish that can come from playing Germany at a tournament.

It was Southgate's penalty miss in a shootout against Germany that prevented England from reaching the 1996 European Championship final at the old Wembley Stadium.

There had already been the loss to Germany on penalties at the 1990 World Cup. Twenty years later came more World Cup agony against Germany, laced with the injustice of a wrongly disallowed goal.

No wonder the renewal of the rivalry with Germany on Tuesday in the round of 16 at this year's European Championship is rousing so many memories of past meetings in England.

But it can seem to be a lopsided rivalry.

There's little sense in Germany about righting any wrongs of the past, despite the still inconclusive debate over whether Geoff Hurst's decisive goal really did cross the line before Charlton and Co. lifted the World Cup in 1966 at Wembley. Even though Uwe Seeler did say ahead of Tuesday's 33rd England-Germany match “this wound will always be there" from the 1966 team he captained.

That final produced what remains England's only major international trophy and a reference point in the history of the nation, beyond sports. Germany had already won the World Cup by that point -- in 1954 — and has won another three titles since then pre- and post-unification.

Add a trio of European Championship wins on top of that and you see that Germany has many glory-filled memories, while England clings to the nostalgia of 1966 and the subsequent heartache often inflicted by its foe.

But it can seem largely former players and fans feeling the weight of history.

“We've got boys born into the 2000s, which is obviously scary,” Southgate said.

“It's of no consequence to them … what happened in 1990 and so on. Of course, they're watching that stuff.”

Southgate played the squad clips of him missing that penalty in the Euro '96 semifinals when they met up for this European Championship.

“It isn't nice for him but it is nice to get the experience from your coach,” England midfielder Kalvin Phillips said.

“You don't really want to talk too much about it to Gareth in case it is too much of a touchy subject.”

Like Phillips, Germany wing back Robin Gosens wasn't born in 1996.

“I obviously heard a lot about it,” he said.

“Thinking about it gives you a good feeling and we want to repeat that.”

Ask many current England players about their first memories of a match against Germany and it's the 2010 World Cup when Frank Lampard's shot crossed the line but was ruled out, sparking the introduction of goal-line technology.

Thomas Müller scored twice in Germany's eventual 4-1 victory and the forward is part of Germany's old guard of 2014 World Cup champions still part of the squad at Euro 2020.

"That has nothing to do with Tuesday's game,” Müller said.

“Some people will be able to draw some motivation from that.”

There's much more familiarity between England and Germany these days in the club game. There are German coaches in the Premier League with Jürgen Klopp at Liverpool and Thomas Tuchel at Chelsea, who have been quickly embraced in England for their tactical intelligence and affable public engagement in English.

“The charisma he has got, a lot of people love him even if you're a neutral fan," England midfielder Jordan Henderson said of Klopp, his coach at Liverpool.

“He's had a big part in English football.”

“It was definitely a regret that he did go,” English Football Association chief executive Mark Bullingham said.

In Germany, though, they wonder about the Bundesliga player in Southgate's squad not starting. Borussia Dortmund winger Jadon Sancho's only appearance so far was as a late substitute in the group-stage win over the Czech Republic.

“When I get my chance to play,” he said.

“I'll show everyone what I can do. I know quite a lot of the players in Germany. I play against them week in, week out.” (AP)