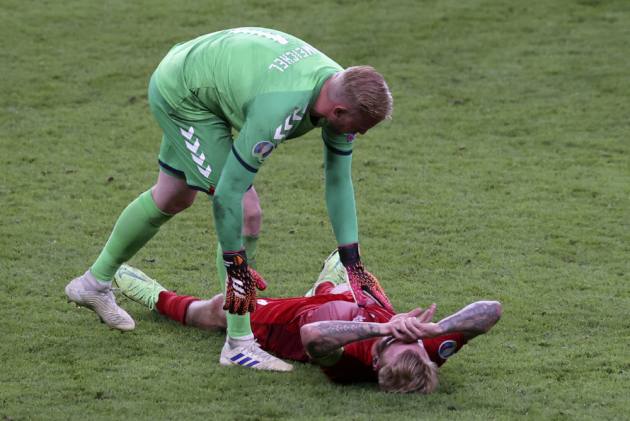 Emotionally charged and emotionally drained, Denmark's incredible run at the European Championship has come to an end.

Powered by a resolve to win the title for teammate Christian Eriksen, who collapsed on the field during the team's opening Euro 2020 game and had to be resuscitated with a defibrillator, Denmark reached the semifinals at a major soccer tournament for the first time since winning the European title in 1992.

All without Eriksen on the field.

“But then there's another part of me and I can't describe with words how much I admire the technical staff behind these players.

“They have been through so much. We have two people from the staff who saved one of our best player's life. We have been fighting like crazy. We play good soccer and I'm grateful for Denmark, the entire nation. We needed the support, we needed the empathy when that happened with Christian.”

Eriksen fell face-first onto the field during his team's game against Finland on June 12 in Copenhagen. His teammates formed a protective wall around him as medical workers saved his life.

On Wednesday, the players fell to the field in exhaustion and disappointment at the end of the match. But they had nothing to be ashamed about.

The Danes scored first against England at Wembley Stadium, with Mikkel Damsgaard knocking in a free kick in the 30th minute, but were forced into extra time after an own-goal. Then Harry Kane put in the rebound of his saved penalty for the deciding goal.

“It's one thing to lose a game, that happens. But losing this way is a disappointment,” Hjulmand said of the penalty. “Because these guys have fought a lot. It's bitter.

“I think we have to digest this before we can describe these feelings. It's a bitter way to leave a tournament.”

Denmark had more than 15 minutes to equalize but the players appeared to be spent by that time. And the task was made more difficult when Jensen was forced off injured, leaving them to play with only 10 men for the second half of extra time after having already used up its six substitutes.

“After the penalty I took off a defender and put a striker in,” Hjulmand said.

“Just the minute after Mathias was injured and was taken out so we played with 10, it's incredible that happened but ...

“There was a lot of struggles, a lot of tired legs. I think only one of them was actually a tactical, not a tactical, but a player who could play more, the rest was a lack of intensity.”

Damsgaard, the 20-year-old midfielder who scored the first goal against England at the tournament, replaced Eriksen in the starting lineup in the group stage after the captain's collapse.

That gives Hjulmand something to look forward to ahead of next year's World Cup.

“Unfortunately we didn't get to the final, but one thing's for sure, we're going to attack again and our future is full of hope and belief,” Hjulmand said.

“These guys are outstanding and the whole nation can be proud and keep giving them the love and respect they deserve. They are an amazing squad that has done an amazing job.”