Euro 2020: Eden Hazard's Return Gives Belgium A Dilemma Ahead Of Their Round Of 16 Clash

Hazard completed the whole match in Belgium's 2-0 win over Finland at the European Championship first time since November 23, 2019 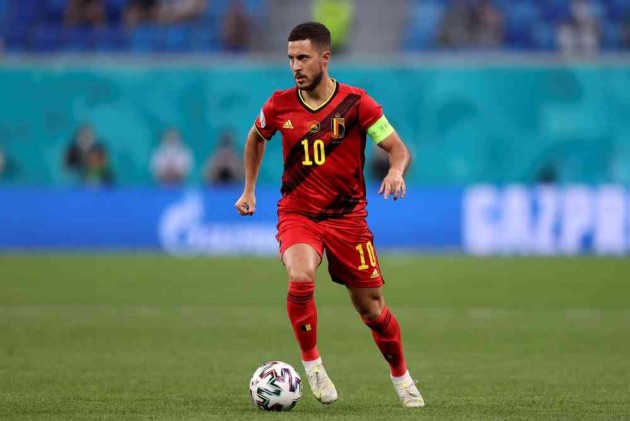 Eden Hazard hobbled toward the sideline after the halftime whistle, seemingly with pain in his ankle after an innocuous fall in the penalty area. (More Football News | Belgium Team Profile)

The nervousness and trepidation among Belgium fans was natural. Was Hazard injured? Again?

In the end, there was no need to panic.

Much to the surprise of many, including probably Hazard himself, the winger completed the whole match in Belgium's 2-0 win over Finland at the European Championship.

That hadn't happened in 577 days, since Hazard played the full 90 minutes in a Spanish league game for Real Madrid against Real Sociedad on Nov. 23, 2019.

Martinez is no stranger to hyperbole — when manager of Everton, he once called hard-working midfielder Gareth Barry “one of the best English players ever” — but his comment about Hazard was understandable in a way.

By midway through the second half of Monday's game in St. Petersburg, he was twisting and turning in little pockets of space, happy to take contact from opponents, and playing with a certain amount of freedom.

For a player who has had such rotten luck with injuries at Madrid since joining the team in 2019 — he has sustained a broken right ankle twice in the past two years — he was finally looking liberated.

“There is not one worry in my mind that he feels strong, he feels happy, his body is reacting well,” Martinez said.

“The next aspect is to see Eden with that final pass, that shot he finishes in the back of the net.”

The question now is whether Hazard has done enough to earn a place in the starting team for the knockout stage.

Is Hazard at the required level to start, for example, a round-of-16 game against a team like France, Portugal or Germany, which could happen given Belgium — as Group B winner — will play one of the four third-place finishers?

That's perhaps Martinez's biggest dilemma as he prepares his team for the game against an as-yet-unconfirmed opponent in Sevilla on Sunday.

Hazard, after all, looked way off the pace in the first half against Finland. The explosiveness of old was not there, he gave away the ball sloppily on occasions, and he often decided against taking on a defender and instead took the easy route of a pass inside.

Despite Hazard's improvement in the second half, as Finland tired and more space opened up, it was hard not to take away from the game that Kevin De Bruyne and Romelu Lukaku are the players who, if anyone, will guide top-ranked Belgium to the Euro 2020 title.

De Bruyne ran the game from central midfield with his measured passing and surging runs. It was his inswinging corner that led to the first goal — a 74th-minute own-goal by goalkeeper Lukas Hradecky following Thomas Vermaelen's header — and it was the Manchester City midfielder's short pass into the area that Lukaku controlled and converted on the turn for the second goal in the 81st.

“Lethal combination,” Lukaku wrote on Twitter in a post that had a picture of him and De Bruyne shaking hands.

As for Hazard, who only expected to play 50 minutes against Finland, much depends on how his body feels after that rare occurrence of a 90-minute appearance. Is six days enough time to recover?

Martinez isn't short of options on the left wing, with Yannick Carrasco, Dries Mertens and 19-year-old Jeremy Doku competing for that position. De Bruyne played in central midfield against Finland but could be pushed up into one of three positions in the forward line, with Youri Tielemans returning to play alongside Axel Witsel in midfield.

That would leave one spot in the attack available alongside Lukaku and De Bruyne.

It may yet depend on which team Belgium plays in the round of 16, and Martinez wouldn't give any assurances on Tuesday that Hazard would start again in Seville.

“I don't know yet. We don't even know who we are playing against and the game needs to be prepared according to the opposition,” Martinez said.

If it's a lower-ranked team, he may feel Hazard is a gamble worth taking.

Because that's what it would feel like at the moment with Hazard, who on Sunday said he might never be the same player again after breaking the same right ankle three times.

Hazard may be back but, no matter what Martinez says, it's not the free-flowing Hazard of old.

Not yet anyway. (AP)