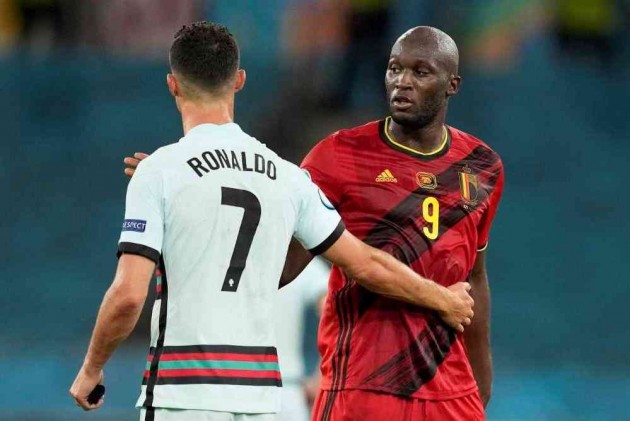 Cristiano Ronaldo was slowly walking off the field when Romelu Lukaku came over to give him a hug. Belgium-Portugal Report | News

The two embraced for a few moments, with Lukaku speaking into the Portugal great's ear. Ronaldo politely thanked him, but quickly made his way back to the tunnel.

He wasn't in much of a chatting mood.

While Lukaku was moving on to the European Championship quarterfinals with Belgium, Ronaldo was heading home after a disappointing end to his tournament — and to his season.

There was no repeat European title. There was no world scoring record. And there probably won't be a player of the year award, either.

The 36-year-old Ronaldo capped a lackluster season in Portugal's 1-0 loss to Belgium in the round of 16 at Euro 2020 on Sunday.

Even though he scored more than 40 goals with his club and his country, his numbers were far from impressive by his standards. He failed to win the Italian league with Juventus, where his future remains uncertain with his contract ending next year. His only titles in 2021 came in the Italian Cup and the Italian Super Cup.

Ronaldo got off to a fantastic start at Euro 2020, though, scoring five goals in the first three matches to move level with former Iran striker Ali Daei as the men's all-time top scorer with 109 goals.

If he kept scoring, and if Portugal stayed on track for another title, he could have been back in the conversation for player of the year.

Ronaldo threw his captain's armband to the ground after the final whistle against Belgium, then was one of the first to walk off.

Portugal had several chances throughout the match at La Cartuja Stadium in Seville, but Ronaldo himself wasn't much of a threat. He had a few chances off free kicks in each half, and with a shot from inside the area near the end of the match.

Ronaldo was backed by a talented Portugal squad that included Bernardo Silva, Bruno Fernandes and Diogo Jota, among others. But they also faltered in attack on Sunday, and Thorgan Hazard's first-half goal ended up being enough to send Belgium to the quarterfinals.

Portugal lost at the same stage at the 2018 World Cup, two years after winning its first major title at Euro 2016. The team's other triumph was winning the inaugural Nations League in 2019.

“It's a big disappointment for us because we believed we could win, like we did in 2016,” Portugal coach Fernando Santos said.

Ronaldo will be 37 by then, and most likely will already have broken the international scoring record.

For now, he could still take solace from having a chance to finish as the top scorer at Euro 2020. He remains the tournament's leading scorer with five goals, one more than Patrick Schick of the Czech Republic, who has advanced to the quarterfinals. (AP)