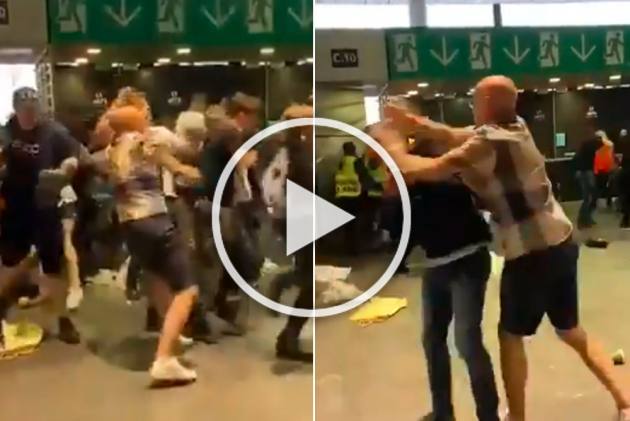 They are called hooligans. There are glorified chapters about their behaviours in history books and popular cultures. But in reality, they all look bad. For instance, watch this viral video:

england fans are sore racist violent losers that need to be punished by fifa. we can't just sit & watch them physically attack italy fans at wembley then hurl racial insults at rashford, sancho & saka. fifa needs to act. we need to create an environment safe for players & fans.ðÂÂÂÂÂÂÂÂÂÂÂÂÂÂÂÂÂÂ pic.twitter.com/gJOv5xT2dt

Some fans claimed that the fight was between English fans, between the haves and have nots [read: ticket].

These are not Italy fans, these are ticketless English yobs breaking their way past security, some of the fans were helping eject them!

Reportedly filmed outside the iconic Wembley Stadium in London, the venue of the Euro 2020 final between Italy and England. As it turned out, the Three Lions failed to keep their second-minute lead and Italy tamed them in their own den.

The regulation time ended 1-1 with Leonardo Bonucci scoring a 67th-minute equaliser. With extra time failing to break the deadlock, the two teams head for a shoot-out. And Italy won 3-2.

The English Football Association was forced to issue a statement condemning the language used against the players.