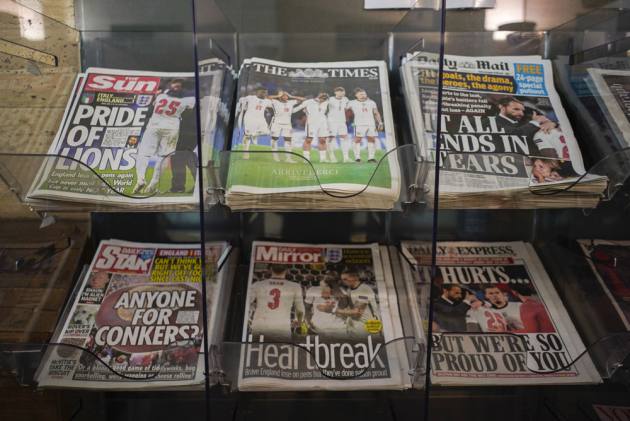 Italy won the European Championship for the second time by beating England 3-2 on penalties in London on Sunday. The match finished 1-1 after extra time. (More Football News)

Gianluigi Donnarumma dived to his left and saved the decisive spot kick by Bukayo Saka, England's third straight failure from the penalty spot in the shooutout in front of its own fans at Wembley Stadium.

England went ahead in the second minute when Luke Shaw scored the fastest goal in a European Championship final. Leonardo Bonucci equalized in the 67th.

Here are the key stats from the match:

Italy have won their second European Championship title, and first in 53 years (also 1968); it's the longest ever gap between championships in the tournament by a single nation, surpassing Spain's 44-year wait from 1964 to 2008.

England have won just 22% (2/9) of their major tournament shootouts (World Cup/EUROs), the lowest ratio of any European nation to have been involved in three or more.

Italy found themselves trailing in a game for the first time at EURO 2020, while overall they spent 65 minutes behind against England in the final, 21 more than they had been behind in their 33-game unbeaten run (in all competitions) coming into the final (44).

Gareth Southgate has made at least one change to the England starting XI for 37 consecutive matches, making a total of 200 changes in that time and last staying with the same starting line-up in the 2018 World Cup semi-final.

At 1 minute 57 seconds, Luke Shaw's opener (his first ever goal for England) was the quickest-ever goal scored in the final of the European Championships, while it was also England’s quickest ever in the competition overall and the earliest Italy have ever conceded in the competition.

At 34 years and 71 days, Italy’s Leonardo Bonucci became the oldest player ever to score in a European Championship final, and second-oldest for a European side in any major tournament final (World Cup/EUROs), after Nils Liedholm for Sweden v Brazil at the 1958 World Cup (35y 264d).

Italy’s Marco Veratti created 14 goal-scoring chances at EURO 2020, the most of any player.

Among European players since the start of the 2018 World Cup, only Belgium’s Kevin De Bruyne (36) has created more goal-scoring chances at major tournaments (Euro/World Cup) than England’s Kieran Trippier (29).

Against Italy, Harry Kane failed to muster a shot or create a goal-scoring chance for only the second time in his 61 appearances for England, also doing so in a friendly against Switzerland in September 2018.

At the age of 36 years and 331 days, Italy captain Giorgio Chiellini is now the third-oldest player to appear in a European Championship final, after Jens Lehmann for Germany in 2008 (38y 232d) and Arnold Mühren for Netherlands in 1988 (37y 23d).