Euro 2020 Final: Italy Vs England – Where To Get Live Streaming In India 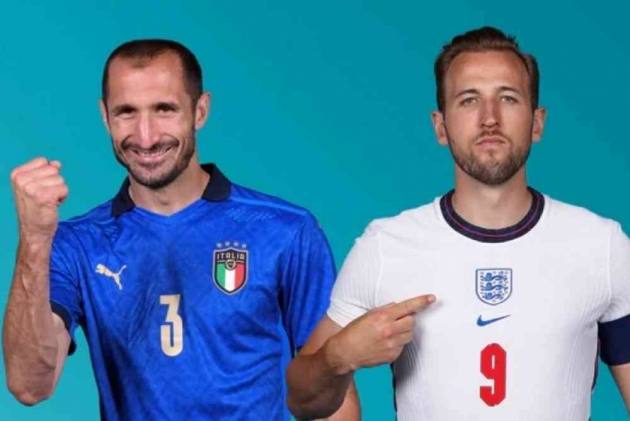 England and its dream of 55 years will come face-to-face with Roberto Mancini’s Italy currently on a 33-match unbeaten run.  Preview | News

It took two epic semifinals to decide which two teams will clash for the title.
England outplayed Denmark, while Italy ousted Spain in penalty shootout.

England’s win sparked a nationwide celebration which is likely to reach its peak if the home team wins in Wembley on July 12.

There will likely be many, many more parties if England manage to beat Italy to claim  its first major tournament since winning the 1966 World Cup.

Italy are vastly experienced when it comes to players. Gareth Southgate’s England have relied on youth and exuberance so far but against a wily team like Italy it will take a lot for the hosts to win.
Italy hold an edge in midfield. With the likes of  Marco Verratti, one of the few genuinely world-class midfielders, Jorginho and Nicolo Barella.

England’s central-midfield pairing of Declan Rice and Kalvin Phillips gives the team a solid base but they should be overmatched. Expect Mason Mount, England’s attacking midfielder, to play a little deeper to help out Rice and Phillips, or even potentially a change of system.

Italy has reached the European Championship final in 1968, 2000 and 2012, while for England its their first final.

~ This is Italy’s 10th major tournament final (6 World Cup, 4 EURO), with only Germany (14) having played in more among European nations.

~ This will be England’s first ever appearance in a European Championship final, and their first in the final of a major tournament since winning the 1966 World Cup. It’s the longest gap between major finals (World Cup/EUROs) for any European nation (55 years).

~England are the 13th different nation to feature in a European Championship final (counting Czechoslovakia and Czech Republic as one) – just three of the previous 12 lost their first ever final in the competition: Yugoslavia (1960), Belgium (1980)and Portugal (2004).

~ EURO 2020 will see England participate in the final while hosting the showpiece, the 11th instance of a European nation competing in a major tournament final as hosts (World Cup/EUROs). England also did so at the 1966 World Cup, beating Germany 4-2 at Wembley. Both of the last two European host nation finalists lost the final (Portugal at EURO 2004 and France at EURO 2016); only one of the first eight had lost their final prior to this (Sweden at the 1958 World Cup).

~ Italy have never lost against England at a major tournament (W3 D1), winning 1-0 in EURO 1980, 2-1 at both the 1990 and 2014 World Cups, and drawing 0-0 before winning on penalties in EURO 2012.
~ This is the third major tournament (EURO/World Cup) final to be held at Wembley Stadium. The previous two were both won in extra time, with England beating Germany in the 1966 World Cup, and Germany beating Czech Republic in EURO 1996.
~ Italy are unbeaten in their last 33 matches in all competitions (W27 D6), scoring 86 goals and conceding just 10 in this run. This is their longest unbeaten stretch of matches in the nation’s history.
~ England have won 15 of their last 17 matches at Wembley Stadium in all competitions (D1 L1), scoring 46 goals and conceding just five in this run.
~ England are unbeaten in their last 12 matches in all competitions (W11 D1), keeping 10 clean sheets and conceding just two goals in the process. The Three Lions have conceded just one goal so far at EURO 2020, with four of the seven previous sides to concede just once in a European Championship tournament winning the trophy (Soviet Union 1960, Italy 1968, Germany 1972 and Spain 2012). (Courtesy Stats Perfom)