Euro 2020: Germany Scrape Into Last 16 After Hard-fought Draw Against Hungary

Germany advanced into the next stage along with Portugal and France in Group F. They now face England in the round of 16 on June 29. 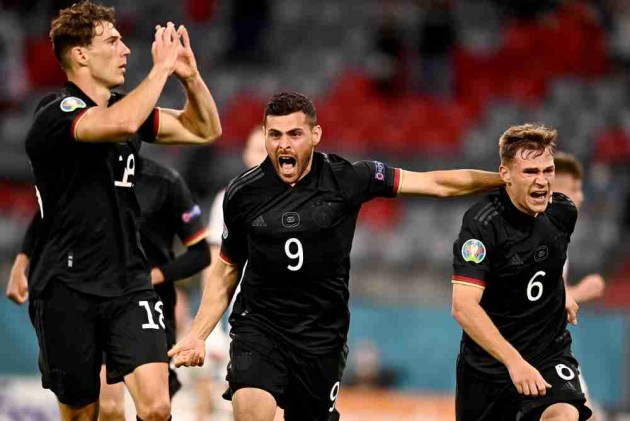 Second-half substitute Leon Goretzka scored equaliser in the 84th securing a hard-earned draw for Germany and also a berth in last 16 in the UEFA European Championship in Munich on Thursday. Germany Profile | Hungary Profile | Football News

Goretzka was alert to the opportunity as the Timo Werner’s shot was blocked. The draw gave Germany a second place and also a berth in the next round of Euro 2020.

A loss to Hungary could have sent German’s out of the tournament. Hungary eventually finished last in the group F with Portugal holding France to a 2-2 draw in another match of this group.

Hungary managed well keeping Germans at bay. They went ahead in the 11th minute of the match when Adam Szalai header found the target.

Kai Havertz brought Germany back on level terms in the 66th minute only for Hungary to snatch the lead with a Andras Schafer strike in the 68th minute.

Havertz at 22 years and 12 days, is the fourth-youngest player to score for Germany in  a major tournament.

Goretzka then came off the bench to ensure a draw.

France topped the group with 5 points, while Germany and Portugal finished on 4 points each.

Germany now face England in the round of 16 on June 29.