Kevin De Bruyne hurt his ankle after being tackled from behind by Portugal midfielder Joao Palhinha during Belgium's Euro 2020, round of 16 match. He immediately asked to be replaced 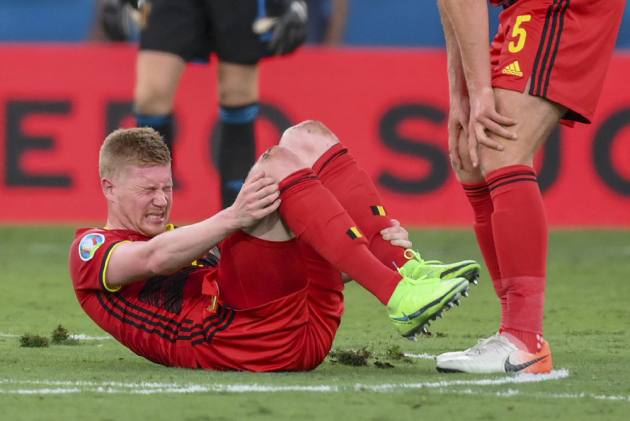 Kevin De Bruyne's chances of playing again at this year's European Championship are in doubt after he was injured early in the second half of Belgium's 1-0 victory over Portugal.

De Bruyne hurt his ankle after being tackled from behind by Portugal midfielder João Palhinha. He immediately asked to be replaced, with Dries Mertens coming in for him in the 48th minute.

Belgium midfielder Eden Hazard also had to leave with an apparent muscle problem. He was replaced by Yannick Carrasco in the 87th.

“We are going to need probably 48 hours to find out the extent of the injuries,” Belgium coach Roberto Martinez said.

“Kevin De Bruyne, it's his ankle, it was a really bad tackle. We'll see. At this point we haven't gotten any medical diagnosis from the medical department. Eden Hazard is more a muscle sensation, so we'll take 48 hours.”

Martinez said tests will be done after the team returns to Belgium on Monday.

De Bruyne's left ankle got severely twisted when Palhinha came in hard from behind to stop his run near midfield in one of the first plays of the second half. The Manchester City player was in pain and slowly walked off the field with a little limp.

Palhinha was shown a yellow card for his tackle.

De Bruyne had already missed Belgium's first game at Euro 2020 against Russia while recovering from a facial injury sustained in the Champions League final. He played in the second half of the team's second group game, scoring the winning goal against Denmark. He started in the third, against Finland, and substituted in stoppage time.

Belgium won all three of its group matches.

Hazard struggled with injuries all season with Real Madrid and also had been gradually returning to top condition during Euro 2020. He came in as a second-half substitute against Russia and Denmark, then started in the final group match against Finland.

Belgium's next match is Friday against Italy in Munich.