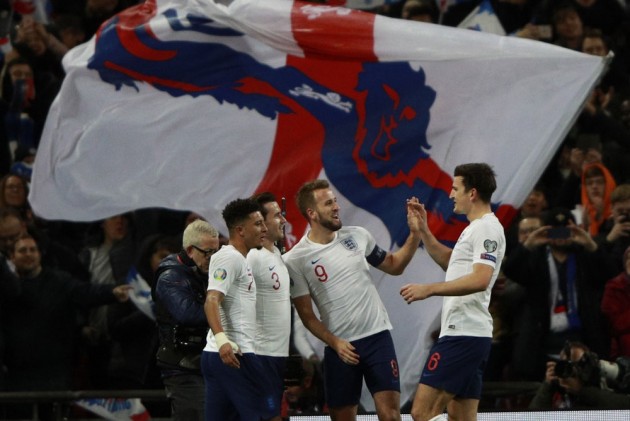 Harry Kane says England wanted to "put on a show" in their 1000th match as they thrashed Montenegro 7-0 to seal Euro 2020 qualification in style at Wembley. (More Football News)

The Three Lions needed just a point to book their place at next year's tournament but had victory wrapped up before half-time, captain Kane scoring a hat-trick inside 37 minutes.

Kane's third was England's fifth of the first half, with an own goal and Tammy Abraham's first strike at international level completing the scoring after the break.

The Tottenham striker acknowledged his side had been keen to make a mark in a milestone fixture.

"It's really good. We've had one slip-up in the whole group, in the last camp, but we've responded really well," he told ITV Sport. "We got the job done here today.

"We wanted to put on a show with it being the 1000th England game - 5-0 at half-time definitely showed that."

Next summer's plans are set

We’ll see you at #EURO2020! pic.twitter.com/5pzBMvGJOJ

Kane's treble moved him to sixth on the all-time England goals list with 31 - just ahead of Alan Shearer.

"We all know how impressive Shearer was at scoring goals, so it's a nice milestone to hit. But hopefully there are a few more to come," he added.

The build-up to the landmark outing was overshadowed by Raheem Sterling's confrontation with England team-mate Joe Gomez, resulting in the Manchester City forward sitting out the fixture.

But Kane is confident Sterling will be in the right mindset to return against Kosovo on Sunday.

"He's been good around the camp, he's been training really well," Kane said. "He'll be disappointed not to have played today, but I'm sure he'll be ready to go and try to get on the pitch on Sunday."