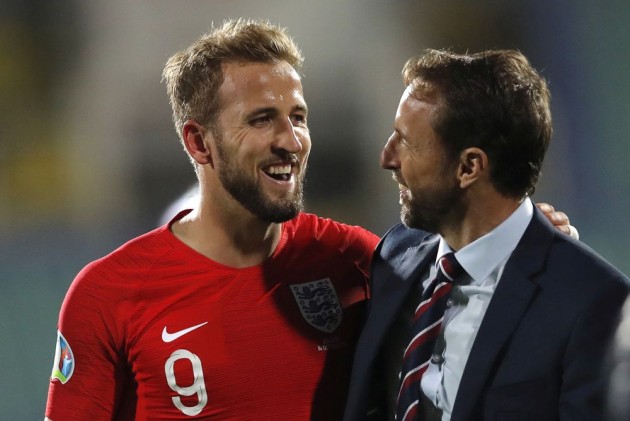 England captain Harry Kane said he is proud of his team-mates after the country's Euro 2020 qualifier was marred by racism in Bulgaria. (FOOTBALL NEWS)

Monday's clash in Sofia was overshadowed by racist abuse directed towards England players during their 6-0 rout of hosts Bulgaria.

Play was stopped twice before half-time during a comfortable victory for England, with an address over the Vasil Levski National Stadium urging an end to racist chanting before a number of Bulgaria fans were removed from the ground.

England players informed the match officials of the discriminatory behaviour and an abandonment looked possible at one stage, though the Group A fixture was completed amid the racial taunts.

Raheem Sterling scored twice in England's 6-0 thrashing of Bulgaria which was stopped twice due to racist chants from the Bulgarian end. In the meantime, English fans chanted "Who put the ball in the racists' net? Raheem f**king Sterling!" pic.twitter.com/jgwXvq5GJR

After the match, Kane – who rounded out the scoring following Marcus Rashford's opener and braces from Ross Barkley and Raheem Sterling – told reporters: "Well I'm definitely proud of my team-mates and my friends and everyone involved in our nation. It wasn't easy for anyone.

"We made a decision as a team to carry on playing. You see us coming together before half-time and we said we would play until half-time then get together and decide what we want to do.

"Everyone wanted to carry on and do their talking on the pitch. It's not easy to play in circumstances like that but the 6-0 victory and the way we played, the manner in which we played I'm extremely proud of for sure."

On what was said at half-time, Kane added: "There was a discussion in the changing room and everyone wanted to carry on playing.