England defeated Germany in a competitive game at Wembley for the first time since the 1966 World Cup final, and many more facts from their Euro 2020, round of 16 clash 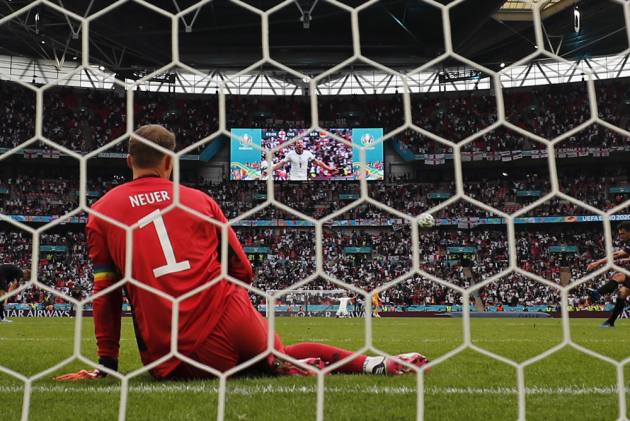 Two second-half goals from Raheem Sterling and Harry Kane were enough for England to beat Germany in their Euro 2020, round of 16 clash at Wembley Stadium on Tuesday.

The win helped Gareth Southgate's Three Lions set-up a quarter-final date with Ukraine, who defeated Sweden later in the night, not so far from London in Hampden Park, Glasgow.

The result in London also meant that Joachim Low ended his glorious 16-year stint as Germany manager with a defeat.

Following are the statistical highlights of the match:

England defeated Germany in a competitive game at Wembley for the first time since the 1966 World Cup final, having been winless in their previous three such encounters.

England are only the second side in European Championship history not to concede in any of their first four games of an edition of the tournament, after Germany in 2016. The only previous time England did so at any major tournament (World Cup & EUROs) was at the 1966 World Cup.

This was England’s 300th international match at Wembley Stadium, while they remain unbeaten in 15 games at this venue in major tournaments (World Cup & EUROs), winning 10 of them.

Germany have only won one of their last six games at the European Championships (D2 L3), failing to keep a clean sheet in all six games in this run.

Raheem Sterling has now scored 15 goals in his last 20 appearances in all competitions for England, after going 27 games without finding the net prior to this run.

Raheem Sterling is only the second player to score each of England's first three goals of an edition of a major tournament (World Cup & EUROs), after Gary Lineker did so at the 1986 World Cup.

Harry Kane has now scored 30 goals for England under Gareth Southgate; in the national side's history, only Gary Lineker scored more while playing under a single manager (35 under Bobby Robson).

Harry Kane equalled Wayne Rooney for goals scored at major tournaments for England (7), with only Gary Lineker (10) and Alan Shearer (9) netting more across the World Cup & EUROs for the Three Lions.

Thomas Müller has appeared in each of Germany’s last 26 games at major tournaments (World Cups & EUROs); the joint-longest streak of any player for the national side, along with Mesut Özil (26 between 2010 and 2018).

Bukayo Saka (19y 297d) became the youngest starter for England in a knockout game at a major tournament since Wayne Rooney at EURO 2004, in the quarter-final against Portugal (18y 244d).