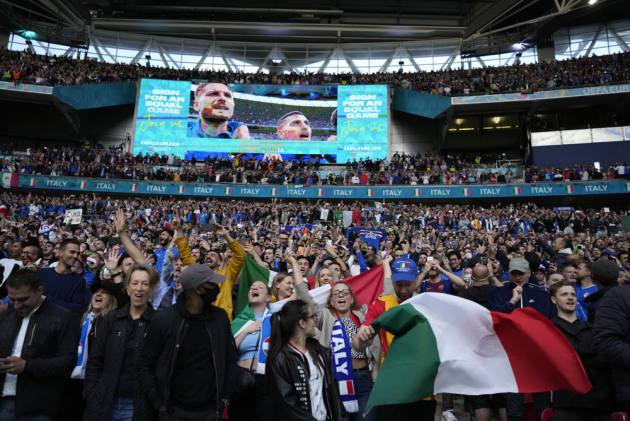 Jorginho converted the decisive penalty kick on Tuesday to give Italy a 4-2 shootout win over Spain and a spot in the European Championship final. The midfielder took a trademark hop at the end of his run-up before rolling the ball into the bottom corner.

The match had finished 1-1 through extra time. Federico Chiesa scored for Italy with a curling shot in the 60th minute but Alvaro Morata equalized for Spain in the 80th.

Morata missed the next-to-last kick in the shootout, giving Jorginho the chance to win it.

Italy will be back at Wembley Stadium for the final on Sunday against either England or Denmark.

Check statistical highlights of the match

âÂÂÂÂÂÂ Spain have failed to progress from a semi-final at a major tournament (World Cup/Euros) for the first time in their history, having reached the final from each of their previous five semi-final appearances.

âÂÂÂÂÂÂ This was the ninth time Italy have gone to extra time at the EURO's, more than any other team, while Spain equalled the record for extra time appearances at a single edition of the competition (3 - level with Portugal in 2016).

âÂÂÂÂÂÂ Italy became just the second side in European Championship history to have as many as five different players score 2+ goals at a single edition of the competition (Chiesa, Pessina, Insigne, Immobile & Locatelli), after France in 2000.

âÂÂÂÂÂÂ Alvaro Morata has scored more goals at the European Championships than any other Spain player (6), overtaking Fernando Torres' five goals. In fact, Morata became the first ever Spanish player to score for club and country at Wembley Stadium.

âÂÂÂÂÂÂ Federico Chiesa has scored twice in his last three games for Italy, more than in his first 28 appearances for the Azzurri combined (1).

âÂÂÂÂÂÂ Leonardo Bonucci made his 17th appearance for Italy at the European Championships, the joint-most for the Azzurri alongside Gianluigi Buffon, while Jordi Alba became Spain’s joint-record appearance holder at the Euros alongside Cesc Fábregas and Andrés Iniesta (16).

âÂÂÂÂÂÂ Spain’s Pedri became the first European player in major tournament history (World Cup/EUROs) to start as many as six such matches at the age of 18 or below.