Euro 2020 Semi-final: England Vs Denmark - Where To Get Live Streaming In India 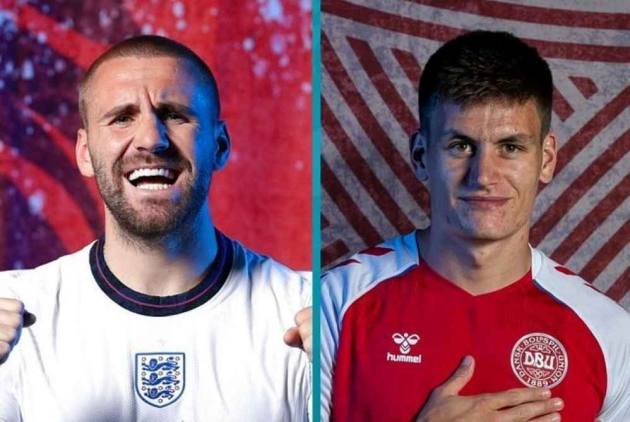 England will be taking on resurgent Denmark in the second semifinals on Thursday.

While England are coming off a superb 4-0 win over Ukraine, Denmark will love to add another chapter to their resurgence after a traumatic collapse of their main player Chrisitan Eriksen  in the event opener against Finland.

Denmark have scored 11 goals so far just one less that the current leaders Spain who have netted 12 goals.

England defeated Germany 2-0 and then carried the momentum to quarterfinal against Ukraine.

Denmark have been on a remarkable journey. Denmark lost that match and the next one against Belgium. Needing a win against Russia, Danes turned up the heat. In knockouts, they outclassed Wales 4-0, while defeated Czech Republic 2-1.

England have been tight in defense keeping five clean sheets so far. Their offense has also been quiet potent. After topping the group stages, England defeated Germany and Ukraine to get here.

~ England have won just one of their last six competitive meetings with Denmark, with that victory coming in the 2002 World Cup (3-0).

~ This will be the third meeting between England and Denmark in a major tournament. England won 3-0 in the second round of the 2002 World Cup, after a goalless draw in the group stages of EURO 1992 – a competition that Denmark went on to win.

~ This is Denmark’s fourth appearance in a European Championship semi-final (1964, 1984 and 1992), with the Danes going on to win the trophy following their last appearance in the final four of the competition.

~ England’s 4-0 win over Ukraine in the quarter-final was their biggest ever European Championship win, and their biggest win in the knockout stages of any major tournament. Indeed, they netted as many goals against Ukraine as they had in their previous four EURO 2020 matches combined.

~ Denmark have had seven different goalscorers so far at EURO 2020 – excluding own goals, only Germany in 2012 (8) have had more different players score in a single edition of the European Championship.

~ England have kept a clean sheet in all five of their games at EURO 2020 so far – no team has ever kept six clean sheets in a single edition of the European Championship or World Cup before.

~ Raheem Sterling has been involved in 22 goals in his last 21 appearances for England (15 goals, 7 assists) and leads the way for goal involvements for the Three Lions so far at EURO 2020 (3 goals, 1assist).

~ Harry Kane has been involved in 27 goals in his last 26 games for England (18 goals, 9 assists). He has nine goals at major tournaments (6 World Cup, 3 EURO), with only Gary Lineker netting more such goals for England (10).

~ Kasper Dolberg has three goals for Denmark in EURO 2020 – only two Danish players have scored more at a single edition of a major tournament before (World Cup/EURO), with PrebenElkjær Larsen (1986 World Cup) and Jon Dahl Tomasson (2002 World Cup) each scoring four. (Inputs from Stats Perform)

Gareth Southgate, England manager: "We've got a fabulous opportunity. It's a chance to make history as we've never been to a European Championship final. It's not so much pressure for this team; it's another challenge that they've got the chance to take on, and at the moment they're rising to those challenges."

Kasper Hjulmand, Denmark coach: "It'll be like playing an away game, but that also has its own charm, so we're actually looking forward to it. We're happy that people will be there and that the fans are back in the stadium, though obviously we would have loved it if half the stadium was dressed in Danish colours."

Head-to-Head: The two sides have met 21 times with England winning 12 to Denmark’s four. Five matches have ended in draw