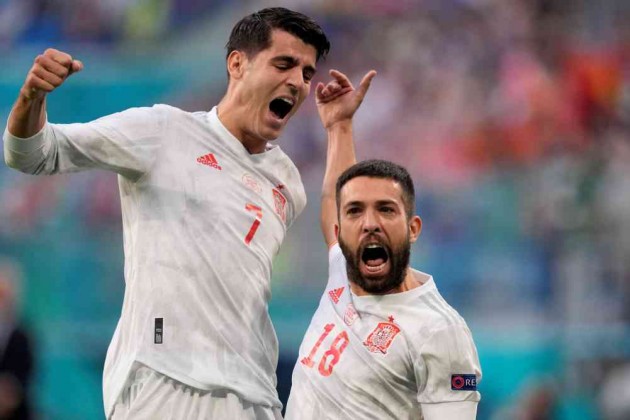 ~ Spain progressed from a European Championship match via a penalty shootout for a fourth time (also 1984 v Denmark, 2008 v Italy, 2012 v Portugal), more than any other nation in the competition's history.

~ All three of Switzerland’s knockout stage matches at the European Championships have gone to penalties (also v Poland in 2016 and France this year).

~ Switzerland v Spain was the fifth EURO 2020 knockout match to go to extra-time; no edition of European Championships has seen more (level with 1996 & 2016).

~ Switzerland became only the third side in European Championship history to score an own goal and have a player red carded in the same match, after Poland v Slovakia this year and Czechoslovakia v Netherlands in 1976.

~ Switzerland’s Denis Zakaria was credited with what was the 10th own goal to be scored at EURO 2020 – more than the 15 previous editions of the European Championship finals combined (nine). Spain themselves have benefitted from three of those 10 own goals (also Martin Dúbravka and Juraj Kucka v Slovakia).

~  Xherdan Shaqiri scored his fourth European Championship goal, more than any other player for Switzerland in the competition’s history. Shaqiri has scored three goals in his last three international matches, as many as he had in his previous 31 such appearances beforehand.

~  Switzerland’s Remo Freuler received the sixth red card awarded at EURO 2020, twice as many as were given at the previous tournament in 2016 (three). Indeed, only 2000 (10) and 1996 (7) have ever seen more at a single European Championship edition.

~ No other players attempted more shots in this match than Spain substitutes Dani Olmo and Gerard Moreno (both six) – the pair have now fired in the most shots of any players at EURO 2020 without scoring (Olmo 16, Moreno 15).

~ Switzerland goalkeeper Yann Sommer made 10 saves against Spain, the most by a goalkeeper in a knockout round match without losing that game since Ivo Viktor made 15 saves for Czechoslovakia in the 1976 final v Germany, which the Czechs won on penalties.

~ Spain's Pedri became only the second European player in major tournament history (World Cup/EUROs) to start as many as five such matches at the age of 18 or below, after Norman Whiteside, who started five times while aged 17 at the 1982 World Cup for Northern Ireland. (With Inputs from Stats Perform)