Cristiano Ronaldo's Portugal suffered a 0-1 defeat to Belgium in their UEFA Euro 2020, round of 16 clash. Read match report here 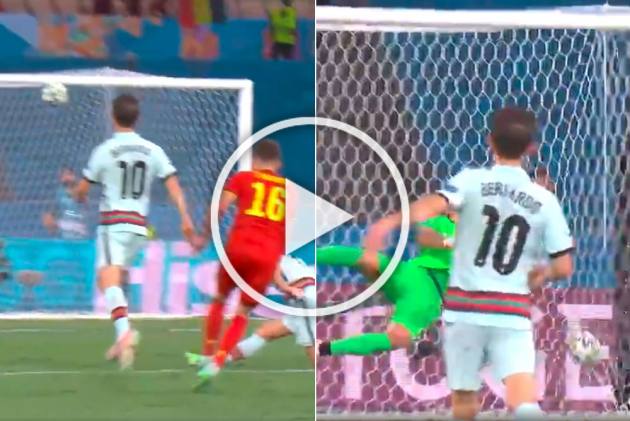 A Thorgan Hazard wonder goal in the first half was enough for Belgium to end Portugal's title defence as the world's top-ranked team set up a dream quarterfinal with Italy.

Regarded as Belgium's own 'golden generation', the current side under Roberto Martinez have dominated the FIFA rankings for some years, in fact, more than 1000 days. But they are still considered the underachievers, having failed to win any major trophy. In the previous edition, they were knocked out by Wales; and lost to eventual champions France in the 2018 World Cup.

But on Sunday in Seville, an ageing Red Devils just did enough against a very strong Portuguese side, featuring Cristiano Ronaldo, who is on the cusp of becoming the greatest scorer if not the greatest.

Despite playing a second fiddle to the Portuguese, Belgium took the lead in the 42nd with Thorgan beating Rui Patricio with a swerving shot from a Thomas Meunier set-up. And they held on to that lead despite a flurry of attacks from Portugal at Estadio de La Cartuja.

This was Belgium’s first win against Portugal since September 1989 (3-0 in a World Cup qualifier), ending a run of five meetings without a victory against them (D2, L3).

Portugal were eliminated from Euro 2020 with just one victory from their four games (D1, L2); their fewest in a single tournament at the European Championships since their first appearance in 1984, when they also won one of four (D2, L1).

Belgium have equalled their longest winning streak at major tournaments, winning five in a row for the second time (both under Roberto Martínez). Indeed, the Red Devils have won 10 of their 11 games across the World Cup and European Championships since Martinez took charge.

Thorgan Hazard has netted in consecutive games for Belgium for the first time, while he has now scored four international goals since his brother Eden last scored for the national team.

Only Cristiano Ronaldo (25) has now made more appearances in the European Championships than Joao Moutinho and Pepe (both 19), meaning the top three appearance makers in the competition’s history all started for Portugal in this game.

Belgium’s starting XI against Portugal had an average age of 30 years and 148 days; their oldest in a game at the European Championships, and the oldest named by any of the remaining teams at Euro 2020 so far.