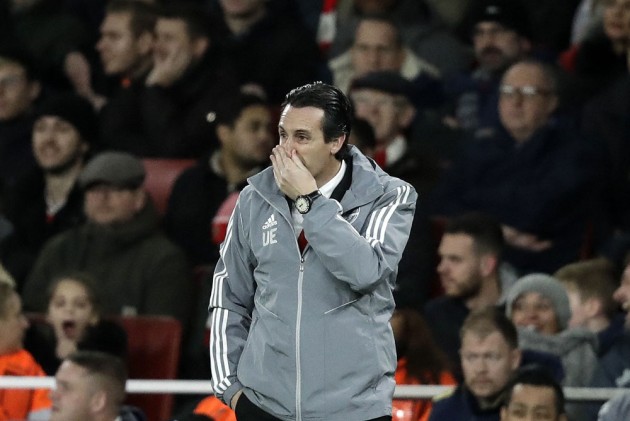 The Gunners are now without a win for seven matches across all competitions, with two rasping strikes from Japan forward Kamada adding to the impression Emery was on borrowed time at a sparsely populated Emirates Stadium.

Pierre-Emerick Aubameyang gave Arsenal a deserved lead at the end of a first-half they dominated, with Granit Xhaka slotting back into the midfield for the first time since being stripped of the captaincy.

But the brittle nature of their collapse spoke of a club in turmoil and a positive result at Standard Liege in a fortnight's time may be needed to be absolutely sure of progress to the knockout stages.

Who might be in their dugout at that stage feels less clear.

Arsenal were on top early on. Bukayo Saka raided down the Frankfurt right in the 11th minute but Joe Willock and Aubameyang appeared to get in each other's way and the latter headed wide.

Gabriel Martinelli passed up chances to add to his haul of three Europa League goals this season when he shot too close to Eintracht goalkeeper Frederik Ronnow from a Xhaka corner and saw Gelson Fernandes clear his header from the subsequent set-piece off the line.

Ronnow dashed out to deny Saka when the winger darted in behind David Abraham, also saving from the teenage winger in the 41st minute.

David Luiz departed with a chest injury in between those two chances and Aubameyang blasted in via Ronnow's leg and the crossbar during the resulting period of stoppage time.

Martinelli played in Willock shortly after half-time but the midfielder misjudged his dinked finish and Ronnow was able to save.

It meant Kamada's spin infield and shot into the corner from the edge of the box in the 55th minute was against the run of play.

The same could not be said when, after Emiliano Martinez saved sharply from Filip Kostic, Kamada was afforded ample room from similar range to dispatch a partially cleared  64th-minute corner.

To compound matters, Shkodran Mustafi hobbled off and Arsenal never recovered their poise. It remains to be seen whether Emery will be given the chance to recover his own poise.

7 - Arsenal have not won any of their last seven matches in all competitions (D5 L2) - they never went on as poor a run across 1235 games under Arsene Wenger, last waiting this long for a win in February 1992 under George Graham (8 games). Denouement. pic.twitter.com/Aqz016ODfn

What does it mean? Emery crisis at breaking point

If Emery could not get Arsenal back on track here, the obvious question was 'when on earth might he do so?'. A Frankfurt side they beat 3-0 in September were on a run of three straight defeats before this rematch and they lie 10th in the Bundesliga. What could possibly go wrong?

Well, a lot, as it happened, as the hosts missed chances to put the game to bed and suffered injuries before collapsing. Frankfurt coach Adi Hutter changed the match with the half-time introduction of Mijat Gacinovic and Dominik Kohr. In the circumstances, Emery's failure to adequately respond feels grimly significant for his own job prospects.

If the space Arsenal afforded Kamada for his first goal was foolish, the room he enjoyed for his second bordered on gross negligence. Nevertheless, both finishes from the 23-year-old forward were of the highest order and the Gunners never recovered from his initial sucker punch.

Arsenal's promising youngster have generally proved immune to their club's wider disfunction on these midweek occasions, but the richly-gifted Willock found himself sucked in here. He either needed to finish or get out of Aubameyang's way early on and did neither, while his team-mates surely would not have unravelled to such an extent had he made it 2-0 after half-time.

- Arsenal were unbeaten in their previous 46 matches in all competitions when leading at half-time before this game (W40 D6) since losing 2-1 at Watford in October 2017.

- Arsenal striker Aubameyang has now scored 10 goals in 13 appearances against Eintracht Frankfurt across all competitions, more than he has against any other opponent in his professional club career.

- Aubameyang has scored 31 goals and provided nine assists in 44 appearances for Arsenal at Emirates Stadium.

- Kamada scored his second and third goals for Eintracht Frankfurt, having netted just once in 27 appearances for the club prior to this game.

Arsenal and their embattled boss will try and claim a first win since the start of October when they travel to Norwich City on Sunday, while Frankfurt can recuperate until Monday when Mainz welcome them in the Bundesliga.