After Dominik Kohr was sent off, Bukayo Saka cut loose with a goal and an assist to lead Arsenal to a 3-0 win over Eintracht Frankfurt in the Europa League. 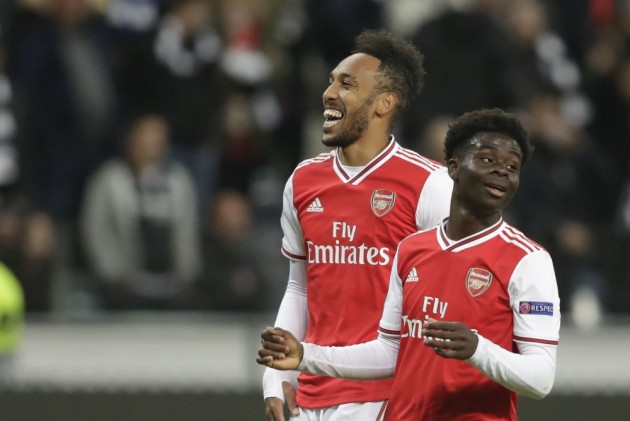 Bukayo Saka put 10-man Eintracht Frankfurt to the sword as Arsenal began their Europa League campaign with a 3-0 victory at the Commerzbank-Arena. (FOOTBALL NEWS)

Making his second start for Arsenal, 18-year-old Saka opened his account for the club in the 85th minute and added an assist for Pierre-Emerick Aubameyang two minutes later as a much-changed line-up bounced back from a second-half collapse against Watford in the Premier League on Saturday.

The late flurry came after Dominik Kohr was shown a second yellow card for a trip on Saka, with Joe Willock having opened the scoring, after another Saka assist, in an open encounter in Germany.

The trip to Frankfurt was expected to be Arsenal's toughest test in Group F – which also includes Standard Liege and Vitoria SC – but an impressive display ensured they will return to London with maximum points.

That moment! That feeling! ðÂÂ¥ðÂÂÂ

Arsenal should have taken the lead in the fifth minute when Lucas Torreira blazed over a half-volley from eight yards after Emiliano Martinez kept out Filip Kostic at the other end.

The Gunners drew first blood when Saka released Willock on the counter-attack and the midfielder cut inside from the left before seeing a shot deflect off David Abraham and loop in off the underside of the bar.

Granit Xhaka struck the crossbar with an in-swinging free-kick from wide on the right that had beaten Kevin Trapp, but Eintracht's hopes of equalising ended when Kohr tripped Saka for his second bookable offence.

Arsenal made the most of their numerical advantage and winger Saka whipped home a brilliant shot from 18 yards with five minutes remaining.

Martinez launched another late counter-attack as Eintracht continued to push, with Saka releasing Aubameyang – who earlier missed an open goal – for a cool finish that capped an important opening victory.