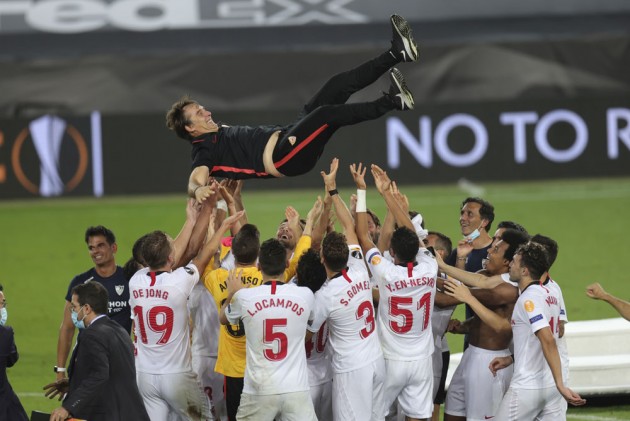 Romelu Lukaku gave Inter a fifth-minute lead from the penalty spot – Diego Carlos might have been sent off for bringing him down - but Sevilla's semi-final hero Luuk de Jong overturned the deficit with a pair of fine first-half headers.

Diego Godin's 35th-minute leveller had Inter swiftly back on terms and the Serie A side appeared to be in the ascendency during a more circumspect second half, until a stunning twist in the tale.

Diego Carlos had been tormented by Lukaku for most of the game but his overhead-kick when Ever Banega's 74th-minute free-kick was partially cleared took a decisive touch off Inter's top scorer and flew into the net.

Referee Danny Makkelie had an unenviable opening to his first European final, with Sevilla players asking for Danilo D'Ambrosio to be harshly sanctioned for an apparent elbow on Sergio Regulion before Diego Carlos clumsily brought down a rampaging Lukaku.

The former Manchester United striker demonstrated how at home he is on the big occasion with a stutter and a coolly slotted spot-kick beyond Yassine Bounou.

A thrilling end-to-end encounter continued to unfold – with the antics of both benches almost as watchable, as a frequently irate Inter boss Antonio Conte was booked.

Goals were exchanged within the space of two minutes after the half hour, with De Jong dispatching a sumptuous free-kick delivery from Banega - making his farewell Sevilla appearance - before Godin did likewise from Marcelo Brozovic's set piece.

Samir Handanovic tipped over a Lucas Ocampos header – Banega again the dead-ball provider – in the final act of a riotous 45 minutes.

Diego Carlos partially made amends for his ragged first-half showing with a sliding block to thwart Roberto Gagliardini.

The centre-back was still unable to handle Lukaku, who streaked clear in the 65th minute but Bounou stood firm.

That gave Diego Carlos his spectacular shot at redemption to put Sevilla back in front before centre-back partner Jules Kounde scrambled an Alexis Sanchez attempt out of the goalmouth and Bounou denied another Inter substitute, Antonio Candreva, in stoppage time.