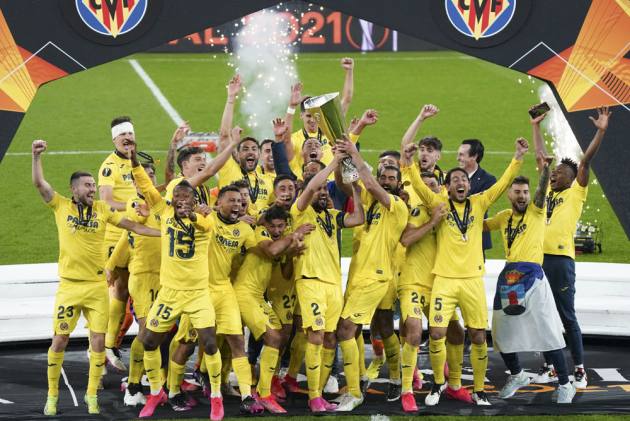 David de Gea missed the only penalty of a marathon shoot-out as Villarreal won the Europa League with victory over Manchester United at Gdansk Stadium. (More Sports News)

Gerard Moreno opened the scoring in the first half of a poor final in Poland on Wednesday to move level with Giuseppe Rossi as the Yellow Submarine's leading all-time goalscorer with 82 - 30 of which have come this season.

Edinson Cavani equalised early in the second half with his sixth goal in five Europa League games for United and the two sides remained level at 1-1 after extra time.

There had been an astonishing 21 successful spot-kicks until United goalkeeper De Gea's tame effort was kept out by his opposite number Geronimo Rulli, with Villarreal winning the shoot-out 11-10.

Villarreal go into the Champions League next season after winning their first major European trophy, with head coach Unai Emery having lifted this trophy an incredible four times.

Ole Gunnar Solskjaer, on the other hand, remains without a trophy during his tenure after a flat performance from United.

Scott McTominay dragged a shot wide, while Juan Foyth was left with blood pouring from his nose and a bandage on his head after an accidental collision with Paul Pogba in a frantic start.

Luke Shaw flashed a drive across the face of the Villarreal goal but it was the LaLiga side who took the lead courtesy of the prolific Moreno after 29 minutes.

The lively frontman capitalised on slack United defending to prod home Dani Parejo's inviting free-kick with his right foot, becoming the first Villarreal player to score at least 30 goals in a season since Rossi in the 2010-11 campaign.

A VAR verdict was no penalty when Alfonso Pedraza just nipped in to get the ball ahead of Mason Greenwood early in the second half.

The Red Devils were level 10 minutes after the break, though, as Villarreal failed to deal with an outswinging corner from Shaw and Cavani pounced, stabbing in from six yards out.

Marcus Rashford somehow failed to find the back of the net from close range with only Geronimo Rulli to beat with United well on top, although Bruno Fernandes appeared to be offside before delivering the cross.

Cavani's improvised header struck Pau Torres, who drilled over the crossbar in added time when he had a chance to snatch victory for Villarreal against the run of play.

Alberto Moreno sliced the first opportunity of extra time wide, with the Yellow Submarine looking more threatening and the Red Devils appearing to run out of steam.

Neither side had the quality to force a winner and although the standard of penalties was higher than the action that had gone before, Rulli dived to his left to keep out a weak De Gea strike to ensure Villarreal could celebrate their finest hour.

Emery masterminded three successive Europa League triumphs with Sevilla and the 49-year-old has ended his first season in charge of Villarreal by winning the competition yet again.

He is the first manager to win either the UEFA Cup or UEFA Europa League four times, surpassing a tally achieved by Giovanni Trapattoni.

As for United, they have not added a trophy to the cabinet since winning the Europa League four years ago and Solskjaer will have to reflect on another missed opportunity.

He will head into Euro 2020 brimming with confidence and despite being starved of service, he stepped up when Villarreal needed him yet again. Villarreal could struggle to keep hold of Moreno, who made three key passes and put away his spot-kick in composed fashion.

England forward Rashford was probably fortunate to still be on the pitch at the end of extra time after a disappointing performance.

He missed a glorious chance and although it would probably have been ruled out anyway, that poor finish pretty much summed up his night.

- Villarreal are the first side to win in their first appearance in a major European final since Shakhtar Donetsk in the 2008-09 UEFA Cup.

- Manchester United have lost six of their last seven penalty shoot-outs in all competitions, only winning against Rochdale in the EFL Cup in September 2019 in that time.

- United striker Cavani became just the third player aged 34 or above to score in a major European final for an English club, after Gary McAllister (36) for Liverpool in the UEFA Cup final versus Alaves in 2000-01 and Didier Drogba (34) for Chelsea in the UEFA Champions League final versus Bayern Munich in 2011-12.