This was the third football fan violence incident that Marseille have been a part of in recent months. They were involved in such incidents in Ligue 1 matches against Angers and Nice. 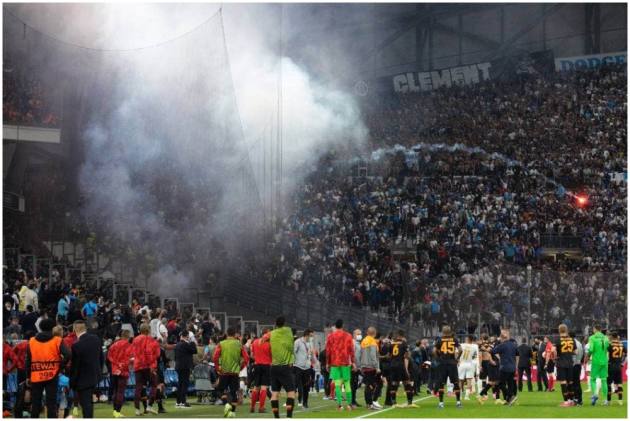 The Europa League game between Marseille and Galatasaray was interrupted for about 10 minutes after rival fans threw flares and firecrackers at each other at Stade Velodrome. The match finished 0-0 on Thursday but pockets of rival fans were fighting inside the stadium more than 30 minutes after the final whistle. (More Football News)

Despite an increased security presence and a buffer zone between around 2,500 visiting fans and Marseille supporters, objects were thrown in both directions late in the first half. Referee Pawel Raczkowski halted the match as some police then intervened to restore order.

Galatasaray coach Fatih Terim went over to his side's fans to try and calm things down while Marseille captain Dimitri Payet did the same. The match resumed with about eight minutes left in the first half with the sound of firecrackers still going off.

There were brief clashes between stewards and some Marseille fans early in the second half. Moments before the final whistle Galatasaray forward Mbaye Diagne and Marseille defender William Saliba grabbed each other and jostled near the sideline.

Marseille was recently involved in fan violence during a French league game at Angers. There was also a serious disorder at the Nice-Marseille match last month. It was suspended and will be replayed next month.

In another match this month, fans threw ripped-up seats and tried to fight each other at halftime during the northern derby between Lens and Lille. Turkish ultras often travel in large numbers. There were fights before the Paris Saint-Germain-Galatasaray game two seasons ago and when Lyon hosted Besiktas four years ago.