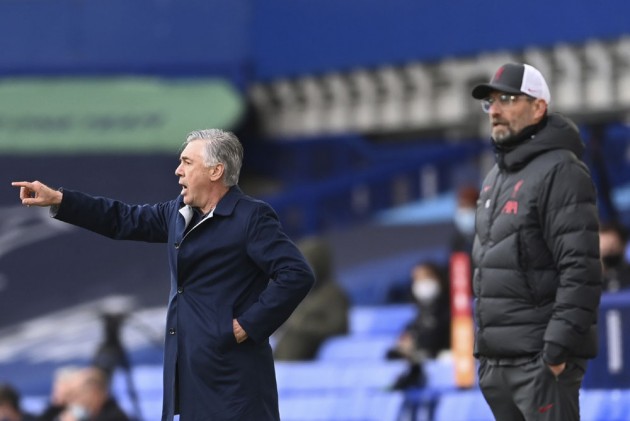 Liverpool were controversially denied a Merseyside derby victory as Jordan Henderson saw a late winner ruled out by VAR in a 2-2 draw with 10-man Everton. (More Football News)

Premier League leaders Everton twice came from behind to level in an absorbing contest at Goodison Park.

Michael Keane cancelled out Sadio Mane's third-minute opener and Dominic Calvert-Lewin did the same after Mohamed Salah scored his 100th goal for Liverpool.

Richarlison was sent off for a rash challenge on Thiago Alcantara and that indiscretion looked to have been doubly punished in injury time by Henderson, only for VAR to intervene and keep Everton three points ahead of Liverpool at the top of the table.

23 - @LFC are now unbeaten in their last 23 meetings with Everton in all competitions, their longest run without defeat against a single opponent in the club's history. Domination. #EVELIV

Liverpool needed only two minutes and 15 seconds to break the deadlock as a well-worked move saw the ball shifted out to Andy Robertson, whose low left-wing cross was side-footed into the roof of the net by Mane.

Everton were then extremely fortunate not to concede a penalty and go down to 10 men. Goalkeeper Jordan Pickford clattered into Virgil van Dijk after Fabinho lofted the ball back into the box from a corner and was rescued by the offside flag against the Liverpool centre-back.

Van Dijk subsequently limped off to be replaced by Joe Gomez, and his absence proved key as Keane rose highest to meet a corner from James Rodriguez and powerfully head home the equaliser.

Liverpool continued to dominate the midfield and look the more dangerous, however, with Trent Alexander-Arnold's curling free-kick drawing a diving save from Pickford before Mane spurned a gilt-edged chance after more impressive work from Robertson.

Only the woodwork prevented Richarlison from completing the turnaround after the restart, his header clattering off the far post after a wonderful deep right-wing cross from James.

The hosts were left to rue that miss as a poor clearance from Yerry Mina presented the ball to Salah, who lashed a first-time effort beyond Pickford.

Pickford had to be at his best to prevent Joel Matip and Salah from extending Liverpool's lead, which was erased when Digne lofted a superb cross for Calvert-Lewin to head into the bottom-left corner.

Henderson appeared to have decisively captialised on Liverpool's numerical advantage when Pickford inexplicably failed to keep his tame close-range effort out, but VAR adjudged Mane to have strayed marginally offside as he latched on to Thiago's telling ball down the left.

What does it mean? VAR ensures another weekend at the summit for Everton

A point ensures Everton cannot be caught this weekend and will remain at the top of the league regardless of other results. Carlo Ancelotti's men have the technology to thank for that, with Mane having initially appeared in line with the defence to the naked eye.

His excellent header was emblematic of a player in peak form and Calvert-Lewin has now scored in each of Everton's first five league games this season, becoming the first Toffees player to achieve that feat since Tommy Lawton in 1938-39.

Pickford shows his best and worst

England goalkeeper Pickford made six saves and was key to preventing Liverpool from making it 3-1, but he was lucky to be on the field following his challenge on Van Dijk and were it not for VAR he would have been reflecting on another costly error in the derby. It was kind of the performance that sums up why his place as England number one is under threat.

- Salah's goal was his 100th for Liverpool in all competitions, in his 159th game for the club – only Roger Hunt (144) and Jack Parkinson (153) have reached the milestone in fewer appearances for the Reds.
- Calvert-Lewin is just the fourth player to score in each of his side's first five Premier League games in a season, after Jose Antonio Reyes (Arsenal, 2004-05), Wayne Rooney (Manchester United, 2011-12) and Sergio Aguero (Manchester City, 2019-20).
- Liverpool have conceded 13 goals in their five Premier League games this season – they conceded as many after 15 matches last season. Indeed, 13 goals is the most they have shipped after five league games since 1953-54 (also 13).
- Everton versus Liverpool has seen more red cards than any other fixture in Premier League history (22), with the Toffees' 15 in this fixture also a record for one side against another in the competition.

Liverpool start their quest to regain the Champions League when they visit Ajax on Wednesday, before welcoming Sheffield United to Anfield on Saturday. Everton visit Southampton a day later.