Marco Silva has been sacked as Everton manager, a day after a 5-2 loss to Liverpool at Anfield in the English Premier League 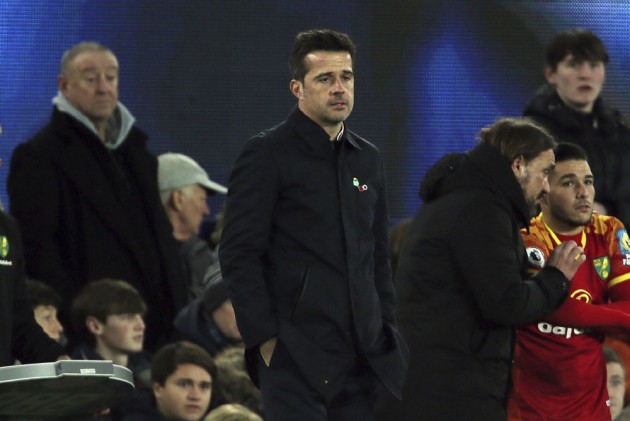 Everton have sacked manager Marco Silva in the wake of their Merseyside derby loss to Liverpool on Wednesday.  (More Football News)

The Toffees dropped into the Premier League relegation zone after suffering a 5-2 defeat to their neighbours at Anfield.

The club announced the sacking of Silva on Thursday, ending the Portuguese tactician's 18-month stay at Goodison Park.

Owner Farhad Moshiri travelled to Liverpool to be at the club on Thursday, an indication that Silva's time was up.

In a statement, Everton said: "Everton Football Club can confirm that manager Marco Silva has left the club.

"Majority shareholder Farhad Moshiri, chairman Bill Kenwright and the board of directors would like to thank Marco for his service over the last 18 months and wish him well for the future.

"Duncan Ferguson has taken temporary charge of the first team and will manage the side for the game against Chelsea on Saturday.

"The club aims to confirm a new permanent manager as swiftly as possible."

Everton sit 18th in the table with 14 points from 15 games, having won just four of those fixtures.

Silva becomes the fifth manager sacked in the Premier League this season after Javi Gracia and Quique Sanchez Flores at Watford, Mauricio Pochettino at Tottenham and Unai Emery at Arsenal.

The former Watford, Hull and Sporting CP boss was appointed in May 2018, leading Everton to an eighth-placed finish last season.

However, their struggles in the first half of 2019-20 have led to the club making a change despite the tight nature of the Premier League table.

Although they are in the relegation zone, Everton are just six points behind eighth-placed Tottenham.

Former Everton manager David Moyes has been strongly tipped to rejoin the club as Silva's replacement, although former striker and club favourite Ferguson takes the reins in the short term.

Tony Cottee, another ex-Everton striker, said the exit of Silva was inevitable.

He wrote on Twitter: "It had to happen & I wish #MarcoSilva well in a future job, but I’m hoping the next appointment very much takes the club forward."