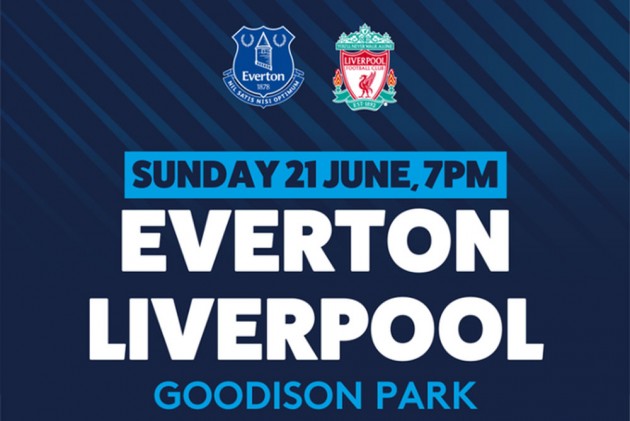 Everton have received approval to host the Merseyside derby against Liverpool at Goodison Park.

Amid the coronavirus pandemic, the Premier League match will be played behind closed doors at Everton's stadium on Sunday June 21, with kick-off at 1900 local time.

Liverpool have also been given the go-ahead to host their remaining matches at Anfield.

The derby would have been played at a neutral venue had approval not been given.

There had been concerns over public health raised by UK's football policing lead, Deputy Chief Constable Mark Roberts, due to the possibility fans could congregate outside grounds.

But Liverpool City Council's Ground Safety Advisory Group confirmed after a meeting on Wednesday they had approved an amended safety certificate that allowed the Toffees to host the fixture.

They "recommended that Anfield and Goodison Park can host football matches behind closed doors, without spectators, to help conclude the 2019-20 Premier League season".

A statement from Everton added: "The decision to play the game at the club's home stadium was made today by the local Ground Safety Advisory Group.

"[It was made] following positive discussions between the club, Liverpool City Council, Merseyside Police, The Everton Fans' Forum, The Blue Union, Liverpool Football Club and Spirit of Shankly.

"It means Everton will play all five of their remaining home fixtures for the 2019-20 season behind closed doors at Goodison.

"The derby is followed by games against Leicester City on Wednesday July 1, Southampton, Aston Villa and Bournemouth.

"Dates and kick-off times for the final three home matches will be confirmed in due course."

Joe Anderson, Liverpool Mayor, had indicated ahead of the meeting that he was optimistic approval would be given but said the advisory group required further information before giving final confirmation.

Everton's match with Liverpool was one of only two games in the initial rounds of confirmed Premier League fixtures last week that did not have a confirmed venue.

Depending on Manchester City's result against Arsenal on June 17, league leaders Liverpool may have the chance to win the title when they face rivals Everton.