Last year, because of the coronavirus pandemic, Wimbledon was canceled for the first time since World War II. 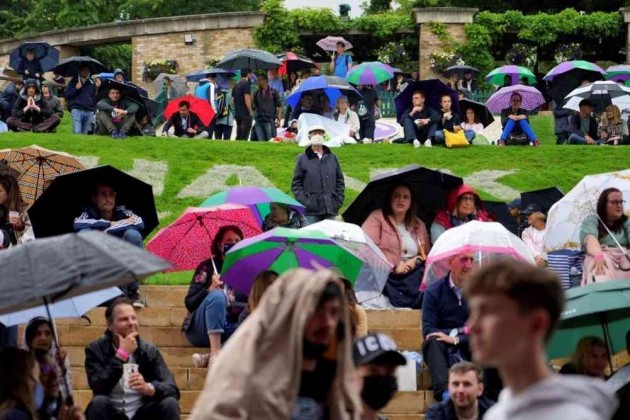 Cheery fans, dreary skies.  Wimbledon is back after a one-year hiatus and the gray, overcast weather felt right at home at an event notorious for its rain delays. (More Sports News)

"Perfect spectator weather," said Hannah Scott, a 26-year-old mask-wearing graduate student from London who was among the first fans to arrive on the grounds on Monday.

"You're not going to burn in the sun."

Last year, because of the coronavirus pandemic, Wimbledon was canceled for the first time since World War II. It's going ahead this year but with a reduced capacity at the start. Organizers, however, are planning to have a full crowd of 15,000 at Centre Court for the men's and women's finals in two weeks.

The usual flower-filled grounds greeted the many fans that poured through gates early Monday. Stands selling food, drinks and souvenirs were staffed and doing business right from the start, while stewards were helping spectators find their way around.

The weather, of course, played its part, too, delaying the start of play for about two hours.

"One of the things that we thought long and hard about, worked hard to deliver, is a familiar feel about The Championships," All England Club chief executive Sally Bolton said.

"So when people arrive at the gates this morning, as they are doing now, what they will see and feel is something very familiar – a Championships that we've all missed for two years."

Arlo Godwin, a 10-year-old boy from London, was soaking up the wet weather and everything else Wimbledon had to offer on his first visit to the club.

"I'm always excited," said Godwin, who was with his mother.

"I was looking forward to it last year but it didn't happen. But I watched a lot of Roland Garros."

Godwin said his favourite player is Novak Djokovic, who was first up on Centre Court in the traditional spot for the defending men's champion, but he and his mother have tickets for Court No. 2.

"We're seeing (Andrey) Rublev and then Dan Evans, which is good because he's British. And Venus Williams, too," Godwin said.

Helen Godwin was also visiting Wimbledon for the first time — after many failed attempts to in recent years to secure tickets online. When she finally got them, the fact Monday is a school day for Arlo didn't matter at all.

"A cheeky day off school," said Helen, a 48-year-old doctor who has worked to set up a vaccine clinic during the pandemic.

"This is a much more educational day."

The walkways around the many courts at the All England Club are usually packed with people, as is the hill behind Court No. 1 where you can watch matches on a big-screen television — a place often called Murray Mount or, in years past, Henman Hill.

This year the atmosphere is so far much tamer, with plenty of space for pedestrians to walk between courts.

And there's even some extra space in the gift shop, where Scott made her first stop after passing through the gates.

"I'm not supposed to be here. I got the ticket from a friend who couldn't make it," said Scott, who bought a Wimbledon towel as a consolation gift for her disappointed friend and then used some tennis lingo to get herself in the mood.