F1 2020: George Russell Felt Like Sakhir GP Win Was Taken Away From Him Twice

Mercedes let George Russell down in the pits, with his hopes of a first Formula One win evaporating as a result. 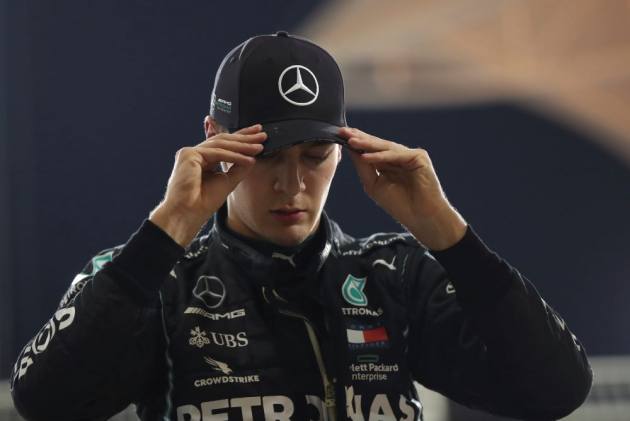 George Russell felt like he had a maiden Formula One victory at the Sakhir Grand Prix snatched away from him twice on Sunday. (More Sports News)

Standing in for seven-time champion Lewis Hamilton at Mercedes, Russell overtook Valtteri Bottas at turn one on the opening lap and established a commanding lead at the front.

However, crossed wires for Mercedes in a double-stacked pit stop under the safety car resulted in him receiving a mixed set of tyres – Bottas had to be sent back out on the same set he entered the pits on due to the mix-up.

Russell returned to the track in fifth and fought his way back up to second after the safety car was withdrawn, but a slow puncture forced him into the pits again and he could only recover to ninth for his first points in F1.

Instead it was Sergio Perez celebrating a maiden F1 win – the Racing Point driver, who is without a team for next year, triumphing for the first time in his 190th start.

"I can't really put it into words to be honest. Jumping out of the car, it wasn't a nice feeling. I've had races where I've had victories taken away from me, but twice? I just couldn't believe it. I gave it everything I had," said Russell to Sky Sports.

"I was managing the race at the start, I felt confident, comfortable, managing the gap to Valtteri. Then obviously we had the muddle up in the pit-stop, that put us on the back foot, I had to overtake.

"I think we still could have caught Sergio, we had such a tyre advantage, the car was so quick. Gutted, but incredibly proud of what we have achieved and happy to have had the opportunity."

Not our day today.

He added: "That's racing. It's a team sport. We're all in it together. Sometimes the driver messes it up, I have once or twice this year in the Williams, sometimes it goes the other way. We learn from these things.

"It was an incredibly late call to pit, as obviously the safety car came out seconds before I came into the pit lane and we got the tyres muddled up. Silver lining, I guess I got my first points in F1."

Perez's success came after he ended the opening lap at the back of the pack, having spun out following contact with Charles Leclerc that landed the Ferrari driver with a three-place grid penalty for next weekend's Abu Dhabi Grand Prix.

"I just want to say well done to Sergio. He's a great driver, he's been in F1 a huge amount of time and he deserves a victory on his scoresheet. Maybe not the one from today, I feel like that was probably our one!" Russell said with a laugh.

Mercedes were summoned to the race stewards after their bungled pit spot saw Russell fitted with tyres designated for Bottas.