With a record-equalling seventh Formula One title in the bag, Lewis Hamilton will go in search of an 11th win of the season in Sakhir 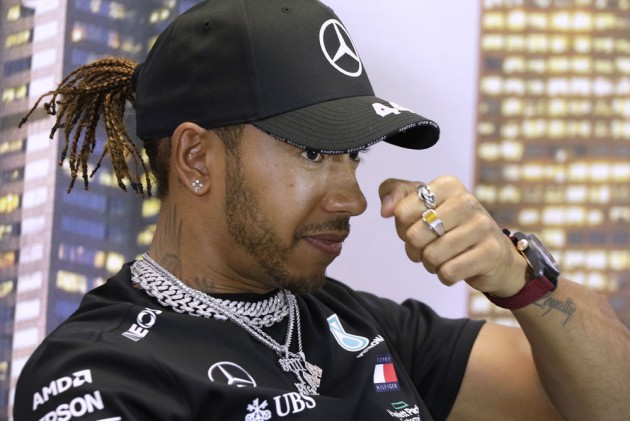 Lewis Hamilton will match his best tally for wins in a Formula One season if he takes the chequered flag at the Bahrain Grand Prix on Sunday. (More Motorsport News)

The Brit has been in a league of his own this year, taking the top step of the podium in 10 of 14 races to retain his crown with three races to spare.

Another success at the Bahrain International Circuit in Sakhir this weekend will keep him in with a chance of matching Schumacher and Sebastian Vettel's record of 13 wins in a season.

Hamilton could also equal Vettel's record of four victories in Bahrain in what has been another incredible year for the Mercedes driver.

Brit Hamilton finished off the job by winning an enthralling Turkish Grand Prix.

He started sixth and needed to avoid surrendering eight points to Valtteri Bottas in order to wrap up the title and the Finn, who spun on the first corner, could only finish 14th.

Racing Point's decision to pit pole-sitter Lance Stroll for fresh intermediate tyres on a drying track proved costly and they had to settle for a podium via Sergio Perez, who was second ahead of Vettel.

Hamilton's Mercedes struggled on the wet tyres and a lock-up into turn 10 saw him let Vettel, Max Verstappen and Alex Albon through and slip to sixth by the end of a thrilling opening lap.

Stroll was given a set new set of intermediates when leading on lap 37 despite initially protesting and it proved to be the wrong decision with the track continuing to dry.

Mercedes wanted to pit Hamilton with two laps remaining amid the threat of rain but he opted to stay out and was able to wrap up yet another title by winning an enthralling race.

WHAT TO LOOK OUT FOR IN SAKHIR

Hamilton has won the past four races and it is difficult to look beyond him making that five in the first of three consecutive races in the Middle East to end the season.

He produced another masterful drive to win in Turkey, with team-mate Bottas enduring a miserable race.

The Silver Arrows will be even tougher to beat back in much warmer conditions at a track where Ferrari have started on pole for the past two years.

Hamilton won this race last year and will certainly be in no mood to wind down after it was mission accomplished last time out.

Ferrari enjoying Bahrain - The last two poles in Sakhir were taken by Ferrari (Vettel in 2018 and Charles Leclerc last year), their best current run in a single GP alongside Canada.

Runners-up again? - If at least one Racing Point driver fails to get on the podium or set the fastest lap, Red Bull would be runner-up to Mercedes for the fourth time if they earn 35 points.

Hamilton eyes personal best - Hamilton has won the past four races and is one victory away from equalling the best winning streak in his F1 career (between races in Italy and the United States in 2014).

Verstappen's woe - Max Verstappen has retired three times in Bahrain, more than any other GP in his F1 career.