An eighth Hungarian Grand Prix win for Lewis Hamilton came without much stress, while Max Verstappen held off Valtteri Bottas for second. 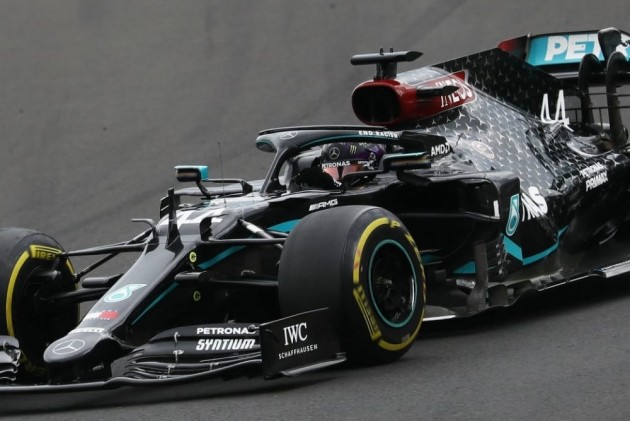 Lewis Hamilton earned a share of Formula One history by romping to victory at the Hungarian Grand Prix on Sunday, while Max Verstappen was second despite a pre-race crash.

Reigning champion Hamilton finished first at the Hungaroring for the third straight season and eighth time in his career, matching Michael Schumacher's record for the most triumphs at the same grand prix.

The 35-year-old Briton converted his 90th pole into a second successive win this season, sending him above Mercedes team-mate Valtteri Bottas to the top of the drivers' standings.

Bottas was unable to make it a one-two, however, with Verstappen on the second step of the podium despite qualifying seventh and requiring a new front wing before lights out.

Hamilton got away well and was three seconds clear of Lance Stroll - who took fourth ahead of Alex Albon and Sebastian Vettel – after the first lap, with Bottas having fallen back through the field after a bungled start.

YES TEAM!! Savour EVERY single one of these days! #DrivenByEachOther pic.twitter.com/5DmbnRitF0

Despite sounding concerned about the status of his engine during the first half of the race, Hamilton negotiated his first major stint well and had a 20-second advantage after pitting for medium tyres as an anticipated downpour held off.

Verstappen was running in second at that point, the Dutchman producing a brilliant performance after coming so close to being unable to start.

He undercut Bottas by pitting for hard tyres at the end of lap 36 but the Finn made an additional stop as Verstappen stayed out.

Bottas got into DRS range on the main straight at the start of the final lap but was unable to get close to enough to make a pass, with Hamilton getting an additional point by setting the fastest lap after switching to softs with four laps remaining.

After being frustrated by Red Bull's performance in qualifying, Sunday did not get off to a great start for Verstappen when, while making his way to a damp grid on intermediate tyres, he locked up at turn 12 and hit the barriers.

A new front wing was among a number of repairs required prior to lights out, but the team got the job done and the Dutchman repaid them magnificently.

It was not all good news, though, as Red Bull were summoned by the race stewards after it was alleged they artificially dried Alex Albon's grid box.

Charles Leclerc and Vettel collided and had to retire from the Styrian Grand Prix last week, but they both finished this time.

Their performance was far from spectacular, though, and Hamilton lapping both the Scuderia's drivers and Bottas lapping Leclerc showed the chasm between Ferrari and Mercedes this season.

Vettel took sixth behind Lance Stroll and Albon, while Leclerc was unable to hold on for a place in the points.

With the rest of the grid starting on intermediates, Haas called Kevin Magnussen and Romain Grosjean into the pits at the end of the formation lap and they were soon running third and fourth respectively.

Although their lack of pace was eventually exposed, Magnussen was able to hold on for ninth and claim their first points of the season.

Having raced on three successive weekends, the drivers have a fortnight to wait until the British Grand Prix provides the first of a double-header at Silverstone.