Lewis Hamilton has already won the world title, but he continued to torment his rivals with a comfortable win in Bahrain. 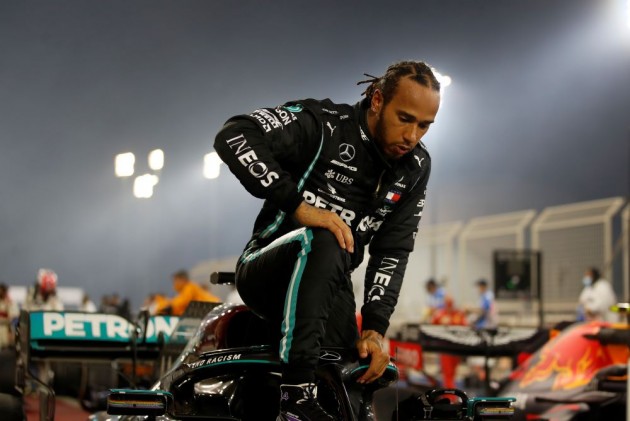 World champion Lewis Hamilton made it five consecutive Formula One wins in a Bahrain Grand Prix that will be remembered for an extraordinary crash involving Romain Grosjean. (News)

Hamilton, who sealed his seventh title in Turkey last time out, equalled the best winning streak of his career with a comfortable victory at Sakhir on Sunday.

Max Verstappen was second and Red Bull got their other car on the podium when an engine failure for Sergio Perez with three laps to go meant Alex Albon moved up to third.

The race had earlier been halted on lap one after Grosjean was able to escape with minor burns from a scary crash that saw his Haas car erupt in flames and cut in half after smashing into a barrier.

Hamilton made a supreme start but Valtteri Bottas fell down the pack as Verstappen moved up to second and Perez up to third, with the Finn in the second Mercedes quickly dropped to sixth.

There was a delay of almost 90 minutes after the unbelievable first-lap crash involving Grosjean.

The French driver was able to walk away with assistance from medical personnel despite his car becoming engulfed in flames when contact with Daniil Kvyat sent him into a section of barriers that then needed extensive repairs before action could resume.

So relieved that @RGrosjean is safe. Thanks to Dr Ian Roberts and the @FIA teams for their courageous and efficient intervention. We have always put safety at the top of our priorities and will continue to do so.#F1 #BahrainGP pic.twitter.com/64xubWCgUH

A safety car was called for when Lance Stroll, who started the previous race in pole, was forced to retire after his own clash with Kvyat flipped his car upside down just after the restart.

Bottas got himself back up to fourth after a battle with Albon but then had to pit having collected a puncture, meaning he re-emerged in 16th.

After the safety car period ended and the top drivers pitted, Hamilton held a comfortable lead over Verstappen and Perez, with the Briton rarely troubled from there.

A late sting in the tail saw Perez forced to retire with a second straight podium agonisingly within his grasp, allowing Albon – the man some believe he should replace at Red Bull – to reach the top three.

With the race finishing behind the safety car as Perez's car was removed, Lando Norris and Carlos Sainz both recorded top-five finishes for McLaren, while Pierre Gasly rounded out the top six.

Bottas had to settle for eighth position, behind Daniel Ricciardo but in front of Esteban Ocon and Charles Leclerc.

While Grosjean's escape will understandably emerge as the main talking point, this was another flawless performance from Hamilton.

He is not letting up after winning his title, with five race wins in a row matching the best streak of his career from 2014.

LEWIS: “Physically the race was very demanding. [Max] had a lot of speed today. I was definitely feeling it. I’m massively grateful to the team. What a privilege to get another result like this”#BahrainGP ðÂÂ§ðÂÂ­ #F1 pic.twitter.com/udi1Ws3oHa

Verstappen, who added an extra point for the fastest lap, remains in the hunt for what would be a hugely impressive second place in the drivers' championship, given the pace advantage Mercedes hold over Red Bull.

He started the race 27 points adrift of Bottas, but has now reduced that gap to 12.

Ferrari shared the front row here last year after Leclerc claimed his first career pole, but began this race with both cars on row six and they failed to build on a good race in Turkey.

Perez's late power failure meant Leclerc salvaged a solitary point from an otherwise frustrating afternoon, which saw Vettel criticise his team-mate on radio after passing him in the opening corners.

This was the first of three races in as many weeks to conclude the 2020 season. The next part of a double-header at Bahrain International Circuit is next week before the campaign ends with the Abu Dhabi Grand Prix on December 13.