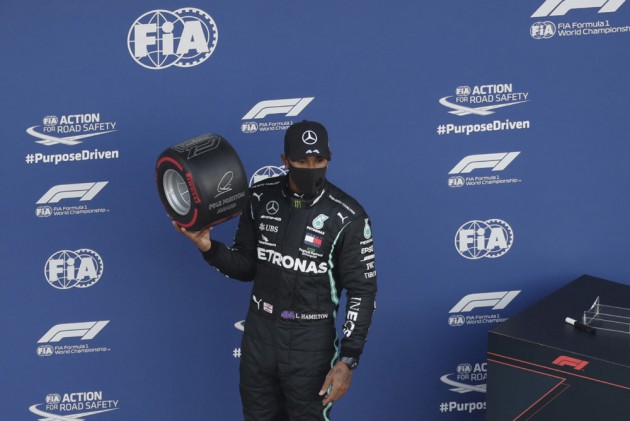 Lewis Hamilton boosted his chances of claiming a record-equalling race win at the Russian Grand Prix as he secured pole position in Sochi. (More Sports News)

The Mercedes driver triumphed last time out at the Tuscan Grand Prix in Mugello to take his career tally of Formula One victories to 90, just one behind the legendary Michael Schumacher's haul.

Championship leader Hamilton appears right on course to match Schumacher on Sunday now after smashing the track record, albeit only after coming through a dramatic session that so nearly saw him miss out on Q3, followed by a nervy trip to see the race stewards.

A spin for Sebastian Vettel led to a red flag in the closing minutes, forcing Hamilton to contend with traffic as he looked to cross the line upon the restart in time to get one more lap in.

The Briton duly managed it, despite a brief trip off the track, then rose from fourth at the end of Q2 to finish comfortably quickest, producing a fastest lap of 1:31.304.

However, Hamilton's position was put into doubt when he was one of four drivers to be summoned to see the stewards for failing to return to the track in the correct manner.

The reigning world champion takes the 96th pole of his F1 career, ahead of Max Verstappen (P2) and Valtteri Bottas (P3)#RussianGP #F1 pic.twitter.com/zHOQ5DPQgm

Sergio Perez produced an impressive Q3 performance to take fourth place, while Daniel Ricciardo and Carlos Sainz will start on the third row of the grid.

Esteban Ocon and Lando Norris ended up seventh and eighth respectively, ahead of the AlphaTauri of Pierre Gasly. Alex Albon in the second Red Bull rounded out the provisional top 10, subject to Hamilton's hearing with the officials.