Sergio Perez fought from the back of the field to claim a maiden Formula One win as a bungled pit stop from Mercedes cost George Russell. 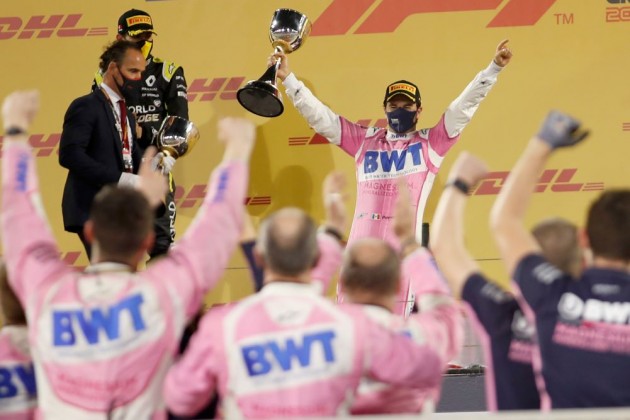 Sergio Perez fought from the back of the field to claim a maiden Formula One win as a bungled pit stop from Mercedes cost George Russell the chance to top the podium at a breathless Sakhir Grand Prix. (More Sports News)

Racing Point driver Perez – without a seat for the 2021 season – span out on the opening lap after making contact with Charles Leclerc, who ended up in the barriers alongside Max Verstappen.

The Mexican worked his way back through the pack and led after Mercedes put the wrong tyres on race leader Russell – who was standing in for Lewis Hamilton after the seven-time champion's positive coronavirus test – when they double-stacked their cars in the pits behind the safety car.

Russell had to return to the pits for a legal set of tyres and after fighting back from fifth to second, he sustained a puncture, ending his hopes of closing in on Perez in the final laps.

With Russell having to make do with first F1 points in ninth, Perez set a record for the longest wait for a maiden win by securing it in his 190th start.

Esteban Ocon followed him over in second for his first podium, with Lance Stroll giving Racing Point a second driver in the top three for the first time.

ARE YOU NOT ENTERTAINED pic.twitter.com/WBKBAhhwGy

Russell took the lead from Valtteri Bottas into turn one but soon had the safety car in front of him after Perez swept across to the inside of turn four and made contact with Leclerc.

Verstappen's attempt to avoid the spinning Racing Point saw him skid into the barrier alongside Leclerc, while Perez was able to limp back to the pits and continue racing from the back.

The safety car went in after lap six and Russell quickly pulled out of DRS range of Bottas, who was two seconds behind after a lock-up into turn one on lap 14.

Russell pitted first and Bottas followed four laps later and, despite a brief worry about having "no power", the Briton's lead increased to eight seconds from the undercut.

Perez benefited from Carlos Sainz and Daniel Ricciardo arriving too late to pit under a virtual safety car and he quickly got past team-mate Lance Stroll and Esteban Ocon to move into P3.

Mercedes' race unravelled when they pitted behind the safety car – deployed after debutant Jack Aitken lost his front wing – sending Russell out on a mixed set of tyres, while Bottas had to return with the same ones once the mistake was spotted.

Perez consequently led the field and after a slow puncture forced Russell to pit from second, he was able to comfortably hold on and get his first taste of success in F1.

Mercedes went to cover off a potential dogfight after the safety car restart with the drivers behind them on fresher tyres.

However, their shoddy execution of a late double-stack effectively compromised their race, with Bottas slipping back to eighth on his used hards and Russell only able to recover to ninth.

Russell led a huge chunk of the race and will be gutted not to have got his first F1 win, but his performance showed he is ready to do battle at the front.

Verstappen and Leclerc looked set to be the leading challengers to Mercedes after their performances in qualifying, but the incident involving them and Perez – which was noted by the stewards – meant they were unable to complete a single lap.

Speaking to Sky F1, Leclerc said: "I think it was a mistake by Checo [Perez] but I'm not putting the blame on him. If there's anyone to blame today it's me, but I think it's more unfortunate than blame."

When told Leclerc had accepted the blame for what occurred, an irate Verstappen responded: "As he should."

The Mexican has been linked with a move to Red Bull and on lap 21 he overtook Alex Albon, whose seat is in jeopardy, as he surged back into contention after dropping to 18th by the end of lap one.

Could that be enough for Perez to convince Red Bull team principal Christian Horner that he deserves a place on the grid next season?

This is what it means...

The season comes to a close with the Abu Dhabi Grand Prix next week, when Hamilton is expected to return for Mercedes and send Russell back to Williams.