Lewis Hamilton is eyeing Michael Schumacher's race win record at the Nurburgring, but Valtteri Bottas could deny him with a career first 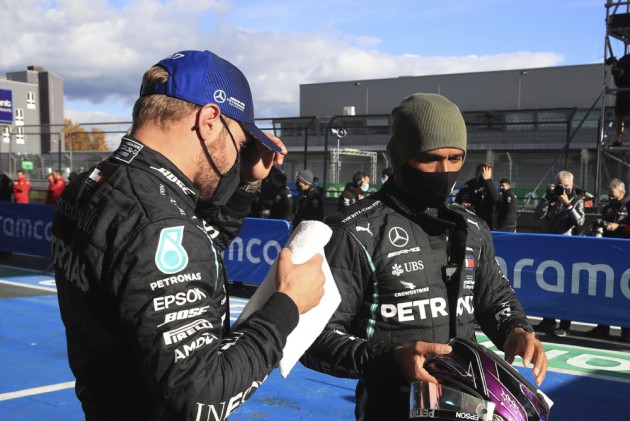 In his 150th Formula One grand prix, Valtteri Bottas has the chance to win back-to-back races for the first time and simultaneously deny Lewis Hamilton a history-making victory. (More Sports News)

The Eifel Grand Prix – which sees the Nurburgring return to the calendar for the first time since 2013 – will have Bottas starting at the front after he ended Hamilton's run of five straight pole positions.

Hamilton will be attempting to equal Michael Schumacher's all-time record of 91 race wins, which he was unable to do in Russia last time out when Bottas emerged triumphant.

Max Verstappen, who was second in Sochi, could also be in the hunt on Sunday after running the two Mercedes cars close in qualifying, while Charles Leclerc is bidding to inject some life into Ferrari from the second row.

A three-way battle between Bottas, Hamilton and Verstappen looked to be going the way of the Red Bull driver as he led after the first runs of Q3, although there was under one tenth of a second between the trio.

Bottas ultimately produced a stunning lap to finish an impressive 0.256 seconds clear of Hamilton, who just edged out a game Verstappen by 0.037s.

Leclerc gave Ferrari a lift with a superb fourth place ahead of Alex Albon, equalling the Scuderia's best 2020 grid slot, having earlier eliminated team-mate Sebastian Vettel, who will start 11th, from Q2.

Multiple drivers discussed how difficult the cold conditions were, particularly as they did not have much running at the circuit after Friday's practice running was called off due to poor weather.

We had a decent qualifying and overall, I’m happy with P3 on the grid  Looking forward to race on this nice track #KeepPushing  #EifelGP pic.twitter.com/k1p8b2I2i2

Bottas has the chance to win two consecutive F1 races, something he has never done before. As well as denying Hamilton the chance to equal Schumacher, such a result would further reduce the deficit in the drivers' championship, which stands at 44 points.

Verstappen said after an impressive qualifying that Red Bull were continuing to close the gap on Mercedes and will hope unusual conditions – a race in Germany in October – or the front two battling among themselves could play into his favour.

Leclerc continues to get the most out of his sluggish Ferrari as the Italian team look to end a six-race run without a podium, their worst form since 2014 when they went eight without having a driver in the top three.

The pressure is on Albon once more – he starts fifth and has been out-qualified by Verstappen at every race in 2020.

The back row is more interesting than normal as Raikkonen (19th) is set to start for the 324th time in F1, beating the previous benchmark set by Rubens Barrichello, while Hulkenberg (20th) is standing in for Racing Point once more as a last-minute replacement for the unwell Lance Stroll. He previously replaced Perez for two events this year after the Mexican tested positive for coronavirus.

P4 today!
Very happy with my lap and with the balance of the car, the small upgrades brought by the team worked properly too which is a good thing. Small steps after small steps, we'll get there.
See you tomorrow pic.twitter.com/b47GqtNWet

Valtteri Bottas (pole): "It is going to be a new day on Sunday, so I just need to focus on the small details that are going to matter and the first of those is going to be the race start. I can't enjoy the pole too much because Sunday is the day that really matters. Obviously being on pole is a good achievement but I can't say it is a turning point yet."

Lewis Hamilton (2nd): "I'm not really sure [where my pace dropped off], the grip didn't feel the same in Q3. I need to go back and have a look. I'm just trying to understand what happened. It is a long race. We will see with the weather – it is a lot cooler here, not the easiest place to overtake either, but there could be lots of opportunities, so I will be pushing hard."

Max Verstappen (3rd): "We brought a few upgrades so the car is working a bit better. Of course with only having run [on Saturday] there are still a lot of things to go through and analyse and optimise as well because of the understeer I had in the car [in Q3]. But it is definitely a good step forward so we are on the right way, I just hope we can keep heading in that direction and keep improving."

Charles Leclerc (4th): "I'm very happy. Quite surprised, to be honest, with the performance we've had this morning and this afternoon, especially in those conditions, as we were expecting to struggle in cold conditions and instead we are performing quite well. I really hope to bring a good result home – it is going to be a tricky race we have not done any high-fuel running yet, but I will try to make the best out of it."

Daniel Ricciardo (6th): "Solid one from the team again, sixth and seventh. This is a maximum downforce circuit, more like Barcelona, where we have struggled more, so it confirms the progress the team has made. Sixth is alright. We can have a good one from there and obviously Charles and Alex in front, they could be in our race."

Nico Hulkenberg (20th): "It was even wilder and crazier than last time. I was in Cologne which is an hour from here. I was due to come this afternoon anyway to do some TV stuff. I was sat with a friend having a coffee at 11am when I see that Otmar [Szafnauer, Racing Point team principal] rings me and says, 'Hulkenberg, hurry we need you here!'"