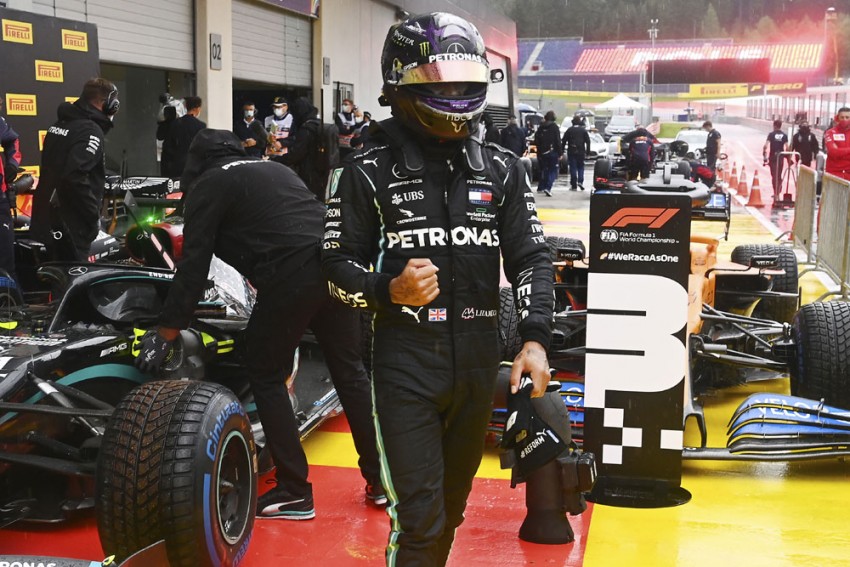 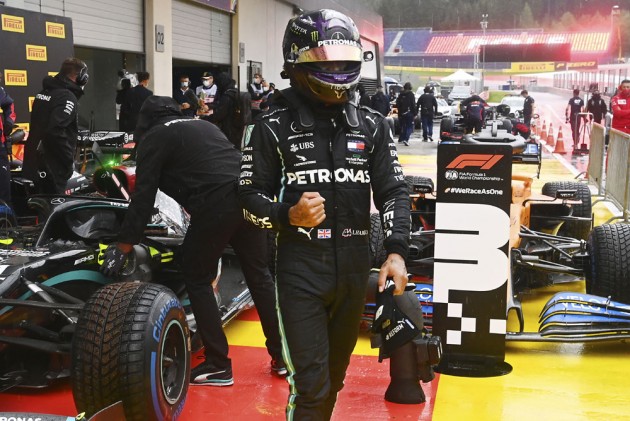 Lewis Hamilton claimed pole in qualifying as he attempts to set a new Formula One record at the Portuguese Grand Prix. (More Sports News)

Hamilton moved level with Michael Schumacher on 91 victories in F1 at the Eifel Grand Prix last time out to consolidate his lead at the top of the championship.

The reigning champion will take to the track in Portimao on Sunday at the front of the grid after recording a time of one minute, 16.652 seconds on his final run in qualifying.

He pipped Mercedes team-mate Valtteri Bottas, who was quickest in all three practice sessions, to pole, with Max Verstappen of Red Bull in third.

Hamilton and Bottas completed their first runs on soft tyres, with the latter taking provisional pole, yet the duo switched to the medium compound after coming back out from the garage.

Bottas improved on his time, but Hamilton – who went back on the track earlier – capitalised on an extra flying lap to finish ahead of his team-mate and secure a ninth pole of the season.

Sebastian Vettel's time with Ferrari is approaching its end and the former world champion failed to reach Q3 for an eighth successive grand prix. He will start from 15th, while team-mate Charles Leclerc qualified fourth.

Your grid for Sunday's race looks like this #PortugueseGP  #F1 pic.twitter.com/WbJTNjLUZn

All eyes will be on Hamilton on Sunday, but credit must go to his team-mate Bottas, who drove brilliantly through practice and qualifying.

If Bottas keeps it up, Hamilton will have to be at his best to hold onto first place and claim a record-breaking victory, though Mercedes may well instruct Bottas to support and protect their lead driver as he aims to make history.

The Finn was left to rue not leaving the garage as early as Hamilton Saturday, meaning he only had one flying lap compared to two for the six-time world champion.

Verstappen should not be discounted, and fellow Red Bull driver Albon has a point to prove over the remainder of the season if he is to secure his future with the team.

Vettel looks down and out as a Ferrari driver and acknowledged after qualifying that Leclerc was in "another league", while Daniel Ricciardo endured a frustrating session with Renault unable to apply sufficient repairs in time for him to get back on the track after a spin in Q2.

Take the ultimate tour of the circuit with @LewisHamilton, as he snatches pole position by just over a tenth #PortugueseGP #F1 @pirellisport pic.twitter.com/z1BemlOdw1

Lewis Hamilton (pole): "I didn't know whether or not I was going to get a lap that would be able to compete with his [Bottas'] – I was always off a tenth or half a tenth or whatever it is – but the decision I took at the end was what created the opportunity. The idea of having an extra lap, an extra chance, an extra stab at getting pole looked good to me so I chose to go that extra lap and I think Valtteri chose the one, but he still did a great job and it was very, very tough and I had to dig very deep."

Valtteri Bottas (2nd): "Obviously the benefit going of going for one, you can fuel for just one timed; if you do two laps you have to fuel for two laps, which is more weight, so based on what I felt in Q2 – and it was a good feeling with the tyres on a single lap – I went for it again in Q3. Ultimately it was the wrong decision but I think maybe the track temp – I don't know – dropped slightly or I just couldn't get the tyres to feel quite the same as they felt in Q2. At the end of that lap I was just hoping I could have one more lap but obviously didn't have the fuel. Wrong call from my side and it is annoying for sure, but Lewis did a good job at the end."

Max Verstappen (3rd): "For me [it was] not personally enjoyable to drive at the moment, with the tyres and grip on the track, because, I mean, I was here in January and I thought it was going to be amazing to drive a Formula One car. I mean, the scenery, everything is perfect but the grip we have… For me personally, you can't really push, you're just driving on ice. It's a bit of a shame."

Daniel Ricciardo (10th): "The team got very close to getting me back out on track for Q3. One more minute and we were on track. It's a shame, I could see them working hard in the mirrors, trying to make it work for me, so it was a bit of a let-down for them, but we'll make it happen tomorrow and move up."

Sebastian Vettel (15th): "At the moment [Charles] is beyond me. It's not just beating, it's like another league. I try everything I can. I think the laps I make, which I am content with, are still too slow. At the moment there is nothing more I can do than just getting everything out of myself and the car."