Lewis Hamilton continued his excellent start to the 2021 Formula One season with a masterful display to win the Portuguese Grand Prix. 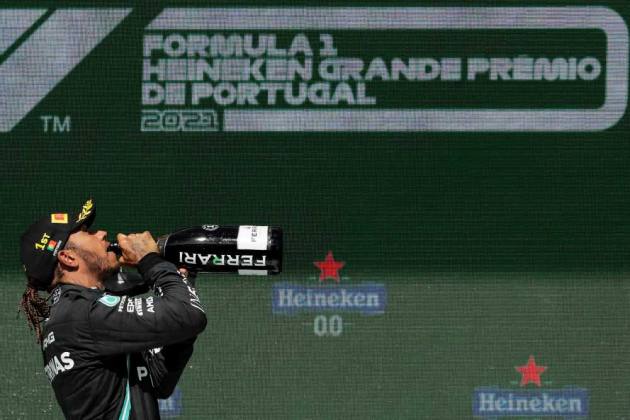 Lewis Hamilton continued his excellent start to the 2021 Formula One season with a masterful display to win the Portuguese Grand Prix. (More Sports News)

Defending champion Hamilton – pursuing a record-breaking eighth title – won the opener at Bahrain and battled back to a heroic P2 after a crash at Imola last month.

That gave the Mercedes superstar a one-point lead over Max Verstappen in the standings heading to Portimao, and he increased that advantage on Sunday.

Hamilton started from second, behind team-mate Valtteri Bottas in pole, but produced another inspired performance.

The Briton initially trailed Bottas, who caught his colleague cold and pushed further clear coming out of a safety car for Kimi Raikkonen's tangle with team-mate Antonio Giovinazzi.

Verstappen beat Hamilton into Turn One to climb to second after the safety car and was then hunting Bottas.

But after failing to sufficiently close the gap, Verstappen lost pace on the remainder of that lap and Hamilton went past him as they crossed the same section of the track again.

It was Turn One again that gave Hamilton the opening for another smart manoeuvre, making use of DRS to take the outside when Bottas stayed tight on the inside.

Hamilton informed his team those overtakes had left his tyres "pretty shot", prompting a tactical battle.

Verstappen pitted first and Bottas quickly followed, but a slower stop meant he was soon caught and overtaken despite initially emerging ahead of the Red Bull.

Hamilton had enough of a lead to pit without falling behind either man, instead eventually catching Sergio Perez, who had been left out on the track until that point, perhaps hoping for a safety car.

There would be no further twist as Hamilton claimed a second consecutive Portimao triumph, leading a familiar podium – Hamilton, Verstappen and Bottas have now shared the steps on a record 15 occasions.

Verstappen missed out on the consolation of the fastest lap, his best time deleted after both he and Bottas, who would claim the extra point, had pitted for the final lap while Hamilton opted not to take the risk.

So slow was Perez by the time Hamilton caught him, the Mercedes man thought he was lapping a straggler.

Apparently unaware he had not himself been leading the race to that point, Hamilton appealed for a blue flag for the Mexican.

"No, you're racing him," replied Mercedes over the team radio. "He's yet to stop."

While Hamilton is again proving himself to be the best driver among those in the leading cars, Lando Norris heads the midfield battle.

He was fourth in Bahrain and third in Imola but this time had to settle for fifth – beaten by Perez for the first time this season.

That was an impressive result after qualifying in seventh, Norris following Bottas and Verstappen in making a fast restart after the safety car but, unlike those two, making his advantage last.