F1 2021: Lewis Hamilton Says Regulations Pegged Mercedes Back But 'We Love A Challenge'

Max Verstappen is the fastest driver in Formula One at the start of the 2021 season, a development Lewis Hamilton feels is by design. 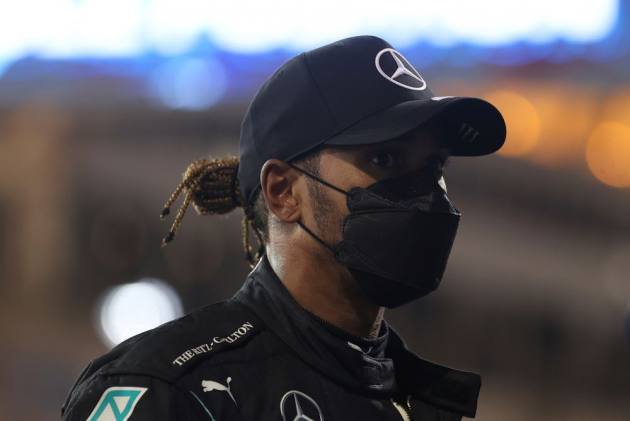 Lewis Hamilton claims it is "no secret" the new Formula One regulations have been introduced to slow Mercedes, but he was encouraged by their opening qualifying session of the season. (More Sports News)

Changes to aerodynamic regulations for 2021 have had a great impact on the reigning champions' low-rake chassis, the Silver Arrows say.

Mercedes have won the past seven constructors' championships, yet Red Bull led the way in pre-season testing.

The fastest lap belonged to Max Verstappen and the same man took pole on Saturday at the season-opening Bahrain Grand Prix.

But Hamilton was only 0.388 seconds back in second and that performance spells good news for the Briton, with all 16 Bahrain winners coming from the first two rows of the grid but only seven of them qualifying on pole.

Meanwhile, Verstappen has retired three times at this event and four times at the Sakhir track.

Hamilton remains very much in contention, despite feeling the rules have been designed to hurt his team.

"It's no secret. The changes, of course they've been done to peg us back," he said. "We've had the changes last year to our engine to do the same thing.

"That's okay. We love a challenge, we don't look down on these things. We just work hard to do the best that we can, and that's what we'll do."

But Hamilton was not amused by a request for him to analyse where Red Bull are now better, as Verstappen - having ended last year with a win - targets back-to-back triumphs for the first time in his career.

"Really? I don't want to tell you what our problem is," Hamilton said. "They're just faster."

I’m so grateful for all the work this team has put into this car. It’s down to each and every team member and all those back at the factory to see that both of these #W12’s go out and deliver each race weekend. Honoured to be a part of this team #WeWinAndLoseTogether pic.twitter.com/WT0Sr2K0jM

With Silver Arrows team-mate Valtteri Bottas qualifying third, the top three - Verstappen, Hamilton, Bottas - are on course to become the first trio to appear on 15 podiums together.

Although Verstappen is still in the lead, this Mercedes challenge seemed improbable for Hamilton just days ago.

"I think this is a really good step forward for us coming this weekend," he said.

"We thought it was double the gap that you see today. That's down to some really fantastic work from the men and women back at the factory.

"We knew we had a bit of an uphill slope to climb. I'm just proud of everyone's efforts."

Three-time Bahrain winner Fernando Alonso is back in F1 with Alpine Team, formerly Renault, where he won two world titles.

And his second debut was a success as he reached Q3 for the first time since Monaco 2018 and claimed ninth on the grid.

"It was good," said Alonso, who won this event on the previous two occasions it opened a season. "I think we have to be pleased with the qualifying.

"I was not confident in any of the sessions so far in the weekend - I was struggling a little bit to feel the rear of the car in windy conditions - and now in the qualifying everything was calmer.

"The night situation I think helped us with the cooler temperatures, so I was able to attack and feel the car a little bit better and it was fun."

On the other hand, Sebastian Vettel was eliminated in Q1 as his second run was hampered by yellow flags prompted by Haas rookie Nikita Mazepin's spin.

No driver has more wins (four) or poles (three) in Bahrain than the former Ferrari man, but his Aston Martin bow did not go to plan.

Vettel will start from 18th and said: "If I panicked now, would it help? If I was really upset?

"For sure, I am upset and angry that it wasn't our fault in a way not to make it through, but we have to take it and do what we can, preparing tomorrow."

Matters could yet get worse for the German, who will appear before the stewards on Sunday for failing to respect the flags, potentially meaning a five-place penalty.