Formula One title rivals Lewis Hamilton and Max Verstappen are unlikely to come to blows, but their bosses might 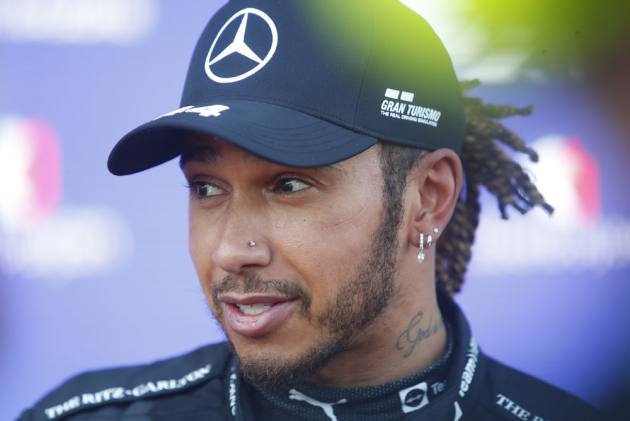 Hamilton and Verstappen are engaged in a title tussle in Formula One but have so far maintained pleasantries off the track in front of the media.

When Horner this week suggested his opposite number "keep [his] mouth shut" as the Silver Arrows struggled in practice at the Azerbaijan Grand Prix, Wolff fired back that the Red Bull boss was "a bit of a windbag who wants to be on camera".

For Hamilton, who qualified in second, and Verstappen, in third, the row was the source of some amusement in Baku on Saturday.

"We should get them in a ring," Hamilton offered.

Verstappen added: "Yeah, but I think the weight division is a bit of a problem. In the height, the reach...

"I mean I'm all for a ring anyway, even in Formula One – instead of penalties!"

Pressed for further comment, Verstappen said: "It's Formula One. There are a lot of stakes involved so everyone wants to win, everyone is competitive.

"I guess it's just a natural thing and it's good for people to read, right? A bit of fire behind it."

Hamilton said: "Naturally, they're the two top leaders of the teams and they've both contributed hugely to the success of both teams.

"[They are] great leaders and of course they're head to head because we are head to head in this tight battle. We generally just like to do our talking on the track, so we're just keeping our heads down."

The Comeback
That’s P2 secured. Really proud of the team for all of their hard work, they really pulled through on this one! #Teamwork #AzerbaijanGP pic.twitter.com/zlAT7LIrfz

Hamilton did just that in qualifying, although he had not anticipated such a competitive display.

The defending champion was seventh in FP1, 11th in FP2 and "still pretty much a disaster" in third in FP3.

However, Hamilton was only denied a 101st career pole by Charles Leclerc, who again profited from a late red flag – this time caused by an incident involving team-mate Carlos Sainz, having himself crashed last time out.

"Honestly, it's one of the greatest feelings for us, for the difficult experience we've gone through and being out of the top 10 all weekend and really struggling to understand and extract performance from our car," Hamilton said.

"It feels fantastic. Congratulations to Charles, who did a fantastic job given the difficult circumstances out there.

"Yeah, it's just a bit overwhelming, really happy to be up here, grateful to have got the lap in, and it puts us in for a much different race than we anticipated after yesterday."

Verstappen was less impressed by how qualifying panned out, bemoaning "all this s*** all the time happening" when the session was cut short.

Not since the Hybrid Era began in 2014 have his team had two victories in a row.

Meanwhile, Lando Norris, a distant third in the standings, will start from P9 due to a three-place grid penalty.

Norris, who has earned points at a career-best 10 consecutive races, qualified in sixth but was deemed to have continued on the track under one of the session's record-equalling four red flags.