David Coulthard says the "exceptional" Lewis Hamilton is "arguably one of the best drivers" in Formula One history. 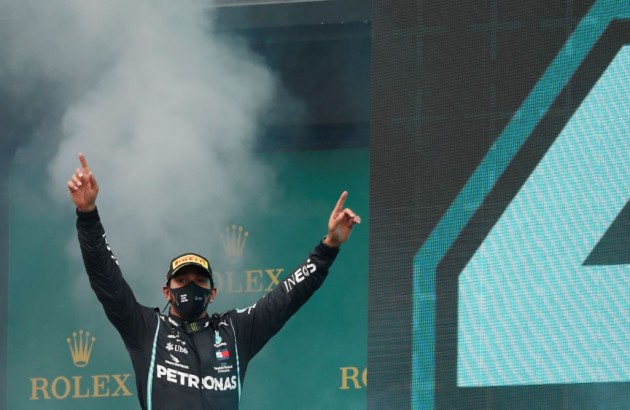 David Coulthard believes Michael Schumacher would be "staring in the eyes of his equal" in the form of Lewis Hamilton if they had driven in the same Formula One era. (More Sports)

The Brit had already made history when he surpassed Schumacher's tally of 91 F1 victories in Portugal last month and has gone on to take his haul to 94 in another dominant season.

Coulthard thinks the 35-year-old deserves to be talked of in the same breath as legendary German Schumacher.

He told Stats Perform News: "There is no question that if Michael was still racing today, at his prime, he would be staring in the eyes of his equal [Hamilton].

"Because I think Michael is exceptional and I think Lewis is exceptional. And I think the way that he won his championship in Istanbul was the perfect way to show how good he is.

"Coming from sixth on the grid, in very difficult conditions and to win by what was quite a big margin in the end.

The emotions spill out, as @LewisHamilton conquers the world for the seventh time #TurkishGP ðÂÂÂÂÂÂ¹ðÂÂÂÂÂÂ· #F1 pic.twitter.com/KzqVKysLqL

While Mercedes have been in a league of their own yet again in 2020, Ferrari have endured a miserable season, languishing sixth in the constructor standings, but Coulthard believes they will come good.

"But they recognise that they have obviously had some issues, and the feedback they were getting from their development, the CFD [computational fluid dynamics], the wind tunnel, and what has actually happened out on the racetrack.

"There has also been a clarification on the engine which means that they haven't been able to extract the same performance. But in Charles Leclerc they have an exceptional young driver, they have got Carlos [Sainz] coming there. What I think is actually a bit confusing is the drop-off in performance of Sebastian Vettel, which you just wouldn't expect from a driver of that quality.

"But it is what it is, Ferrari will be back in the future, next year's regulations are small changes, but they could be significant in terms of what happens around the rear of the car, aerodynamically.

"I believe Ferrari have a new engine in development which should hopefully bring them forward. So in the same way that they were dominant for a period with Michael [Schumacher], and then Red Bull were dominant, now Mercedes are dominant - every cycle comes to an end, and Ferrari will be back."