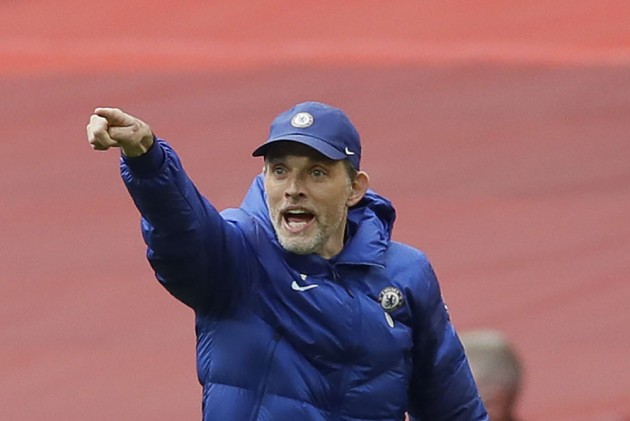 Youri Tielemans' stunning 25-yard strike just after the hour proved the difference in a tight contest.

A VAR intervention denied Chelsea a late equaliser, with Ben Chilwell shown to be fractionally offside before his shot ricocheted into the net off Wes Morgan.

Tuchel felt some of Chelsea's play was too "hectic" during a scrappy first half, but he did not have many words of pointed criticism for a team who will get another shot at silverware in the Champions League final against Manchester City in two weeks' time.

"Of course we're disappointed, but we're not angry with our performance or our boys," Tuchel said at a post-match news conference.

"I think this performance is enough to win the game. We were simply unlucky.

"We've never hidden the fact that you need luck in this game to win at this level. In some moments you need little details, some decisions, referee's decision-making, sometimes a shot like today.

"I think we defended very, very well. We were very aggressive in counter-pressing, we defended very high up the pitch. We did not allow any counter chances for one of the most dangerous counter-attacking teams in Europe.

"We did not allow any half-chances, any chances. I was absolutely happy with the work rate and intensity."

Chelsea have been on a sharp upwards trajectory since Tuchel succeeded Frank Lampard in January, but this was their second dispiriting 1-0 defeat in a week after going down to Arsenal at Stamford Bridge.

That loss left their top-four hopes in the balance and a rematch with Leicester on home turf on Tuesday in the Premier League means there is no time to dwell on Wembley disappointment.

"We will talk about what we did good and what we can do better to be ready for Tuesday," Tuchel said.

"This is it in sports. There is no team that never loses, no player or no single sports guy. It is about bouncing back, showing mentality and belief again.

"We missed out on a trophy and are very sad about it. But we have another competition with two finals against Leicester and Aston Villa [in the Premier League], then another final [in the Champions League].

"We have enough to do. We cannot regret too long."

Reece James' wayward pass that led to Tielemans' winner struck Leicester's Ayoze Perez on the thigh and bounced up to hit his arm, but Chelsea cries for handball were waved away by referee Michael Oliver – in line with the present guidance.

"I didn't see it, the players said straight away that it was handball," Tuchel added.

"But I'm not an expert on handball anymore. I don't know when it's hands or when it's not.

"You need a bit of luck in these decisions. I cannot comment and give my opinion, but my opinion is not relevant anyway because I don't know anymore when they need to punish it or when they can play with the hand."