Fearless RCB Got The Rewards: Virat Kohli After Big IPL 2021 Win Against RR

RCB rode on an all-round performance to beat Rajasthan Royals by seven wickets to boost their prospects of a top-two finish in the league phase. 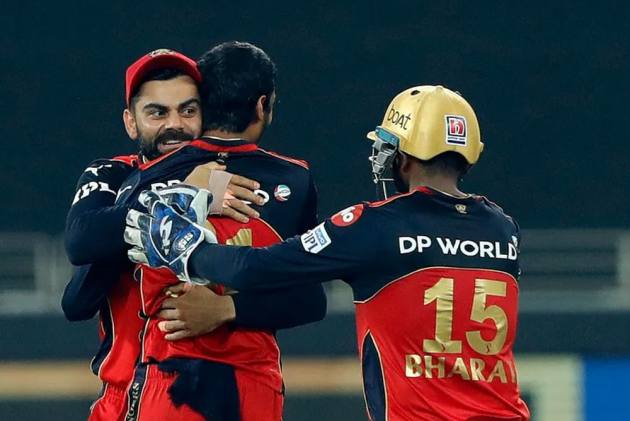 Royal Challengers Bangalore skipper Virat Kohli on Wednesday said impressive middle overs bowling and staying fearless during the game's crucial moments contributed to the team's fine run in this edition of the IPL.

RCB rode on an all-round performance to beat Rajasthan Royals by seven wickets in Dubai to boost their prospects of a top-two finish in the league phase.

"We've got the rewards because we've been fearless and confident in the moments that the game can go either way," Kohli said at the post-match presentation ceremony.

"Couple of important things are clicking: middle-overs bowling is one. If you take wickets you can change the game.

"And batting also, we've got a few good opening starts. Devdutt and I have focused on giving the team good starts so that the middle-order with AB, Bharat and Maxwell can make more. Boys have stepped up, so that's been key for us."

Following their seventh win this season, RCB were placed third in the standings with 14 points, and Kohli was particulary pleased with the way his bowlers have fought back in the last two matches.

"We have come back strongly in two games back-to-back with the ball, which is a great sign. We know if you can hold your nerve with the ball you're going in the right direction. In both games the opponents were 56/0 in the powerplay, but in both games we took wickets to ensure the opposition does not get away.

"We knew that with the kind of bowling attack we have, things can open up when we take wickets.

"As batters you can't take too many risks when you're searching for two points too, so we went to look for mistakes from their batters. (Evin) Lewis hit a few sixes and it was courageous from Garton and the others," the Indian captain signed off.

Yuzvendra Chahal, who was named Man of the Match for his measly spell in the middle overs after RR had got off to a brisk start, said he got his confidence back during the limited overs series in Sri Lanka.

"In the first half of IPL, I didn't get wickets in the first three-four matches. After the break, I backed myself. I bowled well in the Sri Lanka series and I got my confidence back. I spoke to players and family on what I am doing wrong. I wanted to maintain that momentum here," Chahal said.

RR skipper Sanju Samson admitted that his side failed to capitalise on a fine start as his openers added 77 runs in quick time, only to see the team being restricted to 149 for nine in the end.

"We got a great start, couldn't capitalise. Middle order needs some confidence. We went in with intent, the wicket was two-paced and our batters kept mistiming it. To be honest, it's been a hard one week for us, we need to put in a fight as a franchise," Samson said.

"Happy with the effort and intent with the bowling. We don't have anything to lose. That kind of mindset brings a lot of freedom, have seen some funny things happen. Need to keep on believing and fighting till the last match," he added.