Ankita Raina pulled off a crucial singles win against talented Aldila Sutjiadi of Indonesia to lock the tie 1-1 in the Fed Cup, after Rutuja Bhosale suffered a crushing defeat against an unranked Priska Madelyn Nugroho. 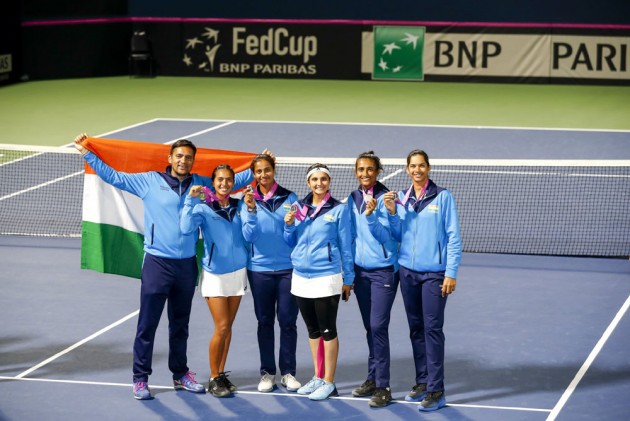 The Indian Fed cup team on Saturday created history by earning a promotion to the Play-offs for the first time ever with Ankita Raina leading the side to 2-1 win over Indonesia.

Ankita Raina pulled off a crucial singles win against talented Aldila Sutjiadi to lock the tie 1-1 after Rutuja Bhosale suffered a crushing defeat against an unranked Priska Madelyn Nugroho.

Ankita, who lost her previous two singles, demolished the challenge of talented Aldila Sutjiadi 6-3 6-3 in the second rubber.

She then combined with seasoned Sania Mirza to beat Sutziyadi and Nugroho 7-6(4) 6-0 to seal India's place in the Play-offs where they will take on either Latvia or the Netherlands in April.

They overcame a sluggish start as they were trailing 1-4 but regrouped to dominate the decisive set.

India finished second in the six-team Group with four wins in a row after losing the opening tie to China, who remained unbeaten in the tournament.

Since earning their place back in Asia/Oceania Group I in 2016, India remained in the regional group.

With the rise of Ankita Raina, things began to improve.

Rituja Bhosale also played a key role in India's team as she provided winning starts in a few ties, sharing the burden with Ankita.

Sania Mizra's return to Fed Cup after four years also helped the team as her inspirational presence and guidance helped the side immensely.