Dejan Kulusevski and Federico Chiesa were on target as Juventus put a poor Serie A campaign to one side in the Coppa Italia final. 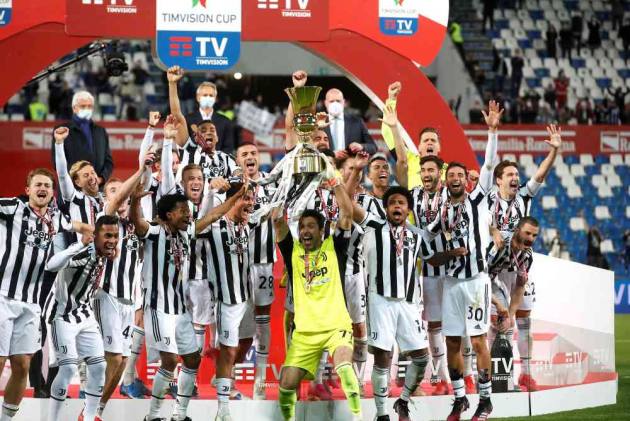 It has been a disappointing first season in charge for Andrea Pirlo, with the Bianconeri knocked out of the Champions League at the last-16 stage by Porto and their hopes of qualifying for next season's competition hanging by a thread ahead of the final round of Serie A fixtures this weekend.

And they looked set for more despair when Ruslan Malinovskiy cancelled out Dejan Kulusevski's fine strike before half-time.

Juve stormed back in the second half, though, and sealed victory in their 20th Coppa Italia final thanks to Chiesa's composed finish with 17 minutes remaining.

Atalanta did most of the pressing in the early stages, with Duvan Zapata and Remo Freuler both flashing efforts narrowly wide of Gianluigi Buffon's goal.

It was Juve who went ahead, though, Kulusevski superbly whipping past Pierluigi Gollini after being picked out on the right-hand side of the penalty area by Weston McKennie.

Gian Piero Gasperini's side deservedly pulled level four minutes before the interval when Malinovskiy collected Hans Hateboer's pass and lashed a powerful strike past Buffon from just inside the area.

Gollini got down well shortly before the hour mark to paw away Kulusevski's near-post flick, while Chiesa curled against the post after a slick move involving Cristiano Ronaldo.

Chiesa was not to be denied in the 73rd minute, collecting Kulusevski's pass and then sliding home his 13th goal in all competitions this season.

Rafael Toloi, who had earlier been substituted, saw red with two minutes remaining for his angry protestations at referee Davide Massa, with Juve comfortably holding on to consign last season's final defeat to Napoli to history.

What does it mean? Juve put league struggles aside

It has been a difficult season for Pirlo, but he at last had something to celebrate. His fragile team could easily have crumbled when Malinovskiy struck, but they persevered, ensuring he became the fourth Juve boss to win the Coppa Italia both as a player and a coach, after Luis Monti, Carlo Parola and Dino Zoff.

Veteran goalkeeper Buffon, meanwhile, also entered the record books – not for the first time in his illustrious career – equalling Robert Mancini as the player with the most Coppa Italia titles (six).

Kulusevski was Juve's brightest spark throughout, scoring his seventh goal of the season across all competitions with a sumptuous first-half finish. That goal made him the youngest player at 21 years and 24 days to have scored in a Coppa Italia final since Ezequiel Munoz (20 years and 233 days) for Palermo against Inter in May 2011.

Matteo Pessina struggled in attack for Atalanta, taking just one shot and losing possession on 11 occasions before he was substituted with more than 20 minutes remaining.

Juve can secure their place in next season’s Champions League if they beat Bologna on the final day of the season on Sunday and Milan do not overcome Atalanta.