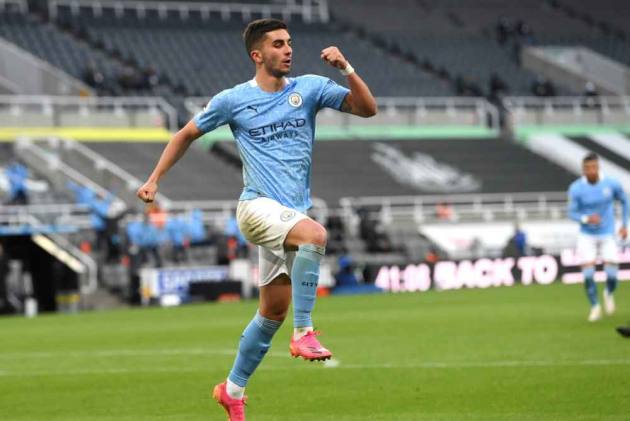 Ferran Torres scored his first Manchester City hat-trick as the champions set an English league record of 12 consecutive away wins with a pulsating 4-3 victory over Newcastle United on Friday. (More Football News)

City – playing their first match since a third Premier League title in four seasons was confirmed on Tuesday – fell behind midway through the first half when Emil Krafth headed past Scott Carson, who was making his first top-flight appearance since May 2011.

Pep Guardiola's side powered back through quickfire goals from Joao Cancelo and Torres, although Joelinton restored parity before the interval from the spot.

Newcastle went ahead again when Joe Willock slotted home after his own penalty was saved by Carson, but Torres scored twice in two minutes to seal a wild win for the champions.

12 - Manchester City have won their last 12 away league matches, the longest ever away winning run by a team in the top four tiers of English league football since the formation of the Football League in 1888. Masterful. pic.twitter.com/GkPDL7lnAQ

Despite early pressure from City it was the hosts who opened the scoring after 25 minutes, Krafth heading his first Premier League goal from Jonjo Shelvey's corner.

Shelvey then crashed a free-kick against the crossbar before two goals in 185 seconds resulted in City taking the lead.

They pulled level in the 39th minute when Cancelo's strike from just inside the penalty area was deflected past Martin Dubravka by Jacob Murphy. Torres then added a second with a superb backheeled flick that looped over Dubravka from Ilkay Gundogan's free-kick.

The Magpies pulled level in first-half stoppage time, though, Joelinton slamming home from the penalty spot after he had been brought down inside the area by Nathan Ake.

Willock put Steve Bruce's side ahead in the 62nd minute, grateful for a tap-in on the rebound after Carson blocked his tame penalty, which was awarded after Kyle Walker tripped the on-loan Arsenal man.

He then became the third youngest player, at 21 years and 75 days, to score a Premier League hat-trick for City when he expertly volleyed into the roof of the net after Cancelo's long-range strike crashed back off the post.

What does it mean? City break another record despite shaky display

Guardiola's decision to hand Carson a shock start, and his debut for the club, told us all we needed to know about where his priorities lie for the remainder of the season.

The champions have two more Premier League games to navigate before that mouth-watering Champions League final against Chelsea on May 29.

Despite their sloppy performance, they have now gone 23 away matches unbeaten in all competitions – the longest-ever such run by a team from England's top four tiers.

Torres' quietly impressive maiden season at City continued with another fine display. His treble took him to 13 goals for the campaign, with team-mate Phil Foden (14) the only player aged 21 or under to have scored more for a Premier League club across all competitions this term.

Ake struggles on return to line-up

It was not hard to see why Ake has been limited to just 10 Premier League appearances this season. The former Bournemouth man was well off the pace and committed the foul that led to Joelinton's successful penalty at the end of the first half.

90% - Scott Carson completed 90% of his passes in tonight's match (9/10), his highest ever percentage in a Premier League match in his 146th appearance. Adapted. pic.twitter.com/ULPZEtGP4a

- City have won their last 12 away league matches, the longest ever away winning run by a team in the top four tiers of English league football since the formation of the Football League in 1888.
- This was a 23rd consecutive unbeaten away match in all competitions for City (W21 D2), the longest unbeaten away run by a side in the top four tiers of English football, overtaking Notts County’s run of 22 in 2012.
- Newcastle suffered a home top-flight defeat despite scoring three goals for the first time since losing 4-3 to Manchester United in March 1976, while City won an away league match despite conceding three for the first time since December 2012, when they won 4-3 at Norwich City.
- Torres became the youngest ever player to score a hat-trick for a team managed by Guardiola, overtaking Gabriel Jesus who was 21 years and 218 days against Shakhtar Donetsk in November 2018.
- Carson made his first Premier League appearance since May 2011 for West Brom, a gap of nine years and 357 days. It is the sixth longest gap between appearances in Premier League history, and the longest ever for a goalkeeper.
- Carson became the first goalkeeper to appear in the Premier League for six different clubs (Leeds United, Liverpool, Charlton, Aston Villa, West Brom and City). The previous most was five clubs represented – Shay Given and David James.
- Willock became the youngest player to score in five consecutive Premier League appearances (21y 267d) since Jose Antonio Reyes in September 2004 (21y 10d) and the second youngest English player ever, after Michael Owen in 2001 (21y 247d).
- Since 2003-04 (when Opta began recording possession data), Newcastle became the first team to score three goals despite having as little as 17.7 per cent possession in a Premier League match. City had 82.3 per cent possession, the second highest on record since the 2003-04 season, behind only their own 83 per cent against Swansea City in April 2018.