Indian chess player Dronavalli Harika will meet China's Zhu Jiner in the fourth round of the tournament. 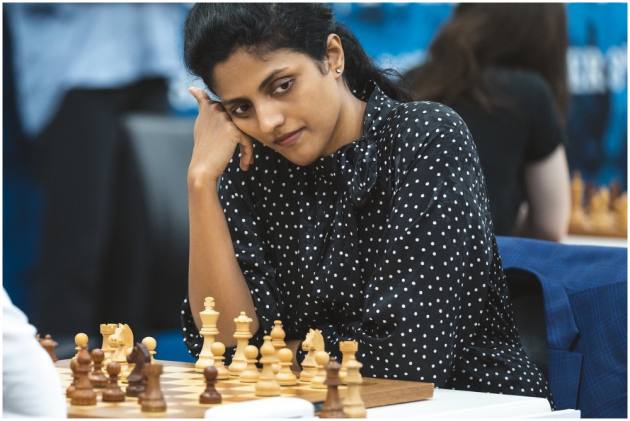 India's Dronavalli Harika defeated former world champion Antoaneta Stefanova of Bulgaria in the third round of the FIDE Grand Swiss chess tournament to grab a share of the lead. (Other Sports News)

After three rounds, a group of nine players with 2.5 points, led by Nana Dzagnidze of Georgia, are in joint lead.

On board two, Harika defeated Stefanova with pieces in 68 moves although, for the most part, black was in no danger of losing. However, the Bulgarian made a wrong choice in a rook endgame that cost her dear.

Rout and Agrawal moved to two points after three rounds with the wins.

Harika will clash with China's Zhu Jiner in the fourth round. Rout and Agrawal will be up against Alina Kashlinskaya (Russia) and Anna M Sargsyan (Armenia) respectively.

In the men's section, Grandmaster seventh-seed P Harikrishna bounced back after a difficult start by beating Ivan Morovic Fernandez of Chile to move up to 1.5 points.

The 17-year-old Nihal Sarin, who held top-seed and world No.2 Fabiano Caruana in the second round, continued his good form with a win over Teimur Kuybokarov (Australia) in 40 moves in a Ruy Lopez game.

GM Sarin will meet Pavel Ponkratov (Russia) in the fourth round while Harikrishna will take on Sergei Movsesian (Armenia).

None of the other Indian men could secure wins with only D Gukesh, the country's youngest-ever GM, K Sasikiran, R Praggnanandhaa, Arjun Erigaisi, and Raunak Sadhwani managing draws.

After three rounds, Iranian-born Alireza Firouzja is the sole leader with full points in the Open section after beating Alexandr Predke.

As many as six players including Sarin trail Firouzja by half a point after the third round. Ten Indian men and five women feature in the tournament.

The Grand Swiss Tournament and Women’s Grand Swiss 2021 are part of the qualifications for the 2021-23 World Championship cycle. The top two finishers will qualify for the Candidates Tournament 2022.